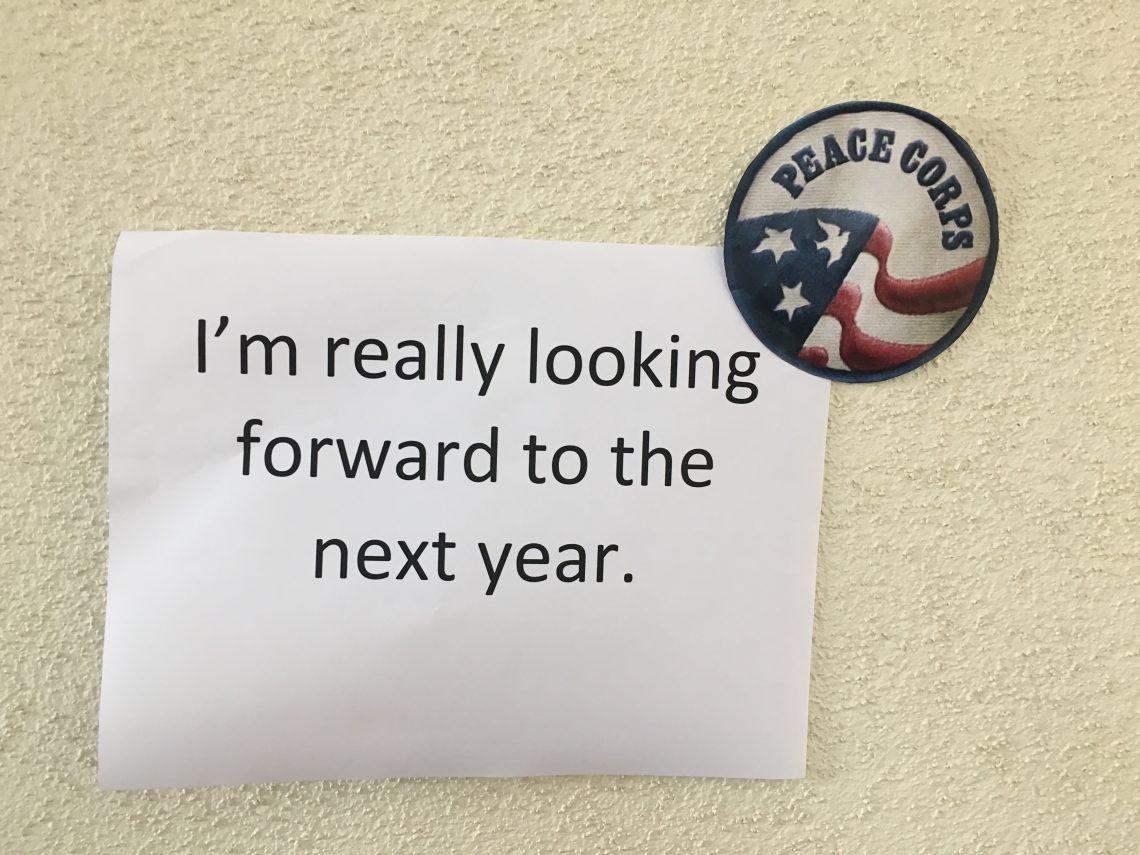 Last week I attended the Mid-Service Training conference for Peace Corps Volunteers (PCVs) in my Bak’tun (what we call training groups here), and overall I’d say it was a fairly pleasant experience and we learned a lot of useful information, though after four days of classes and activities I was ready to go back to my site, mostly because I have a lot of work to do before I go on vacation in March, including a meeting with a Peace Corps Response volunteer on Saturday in Xela, a large city about an hour and a half bus ride from the town where I live. As usual, volunteers stayed in the Mirador hotel about a 3-minute walk from headquarters, pictured below. 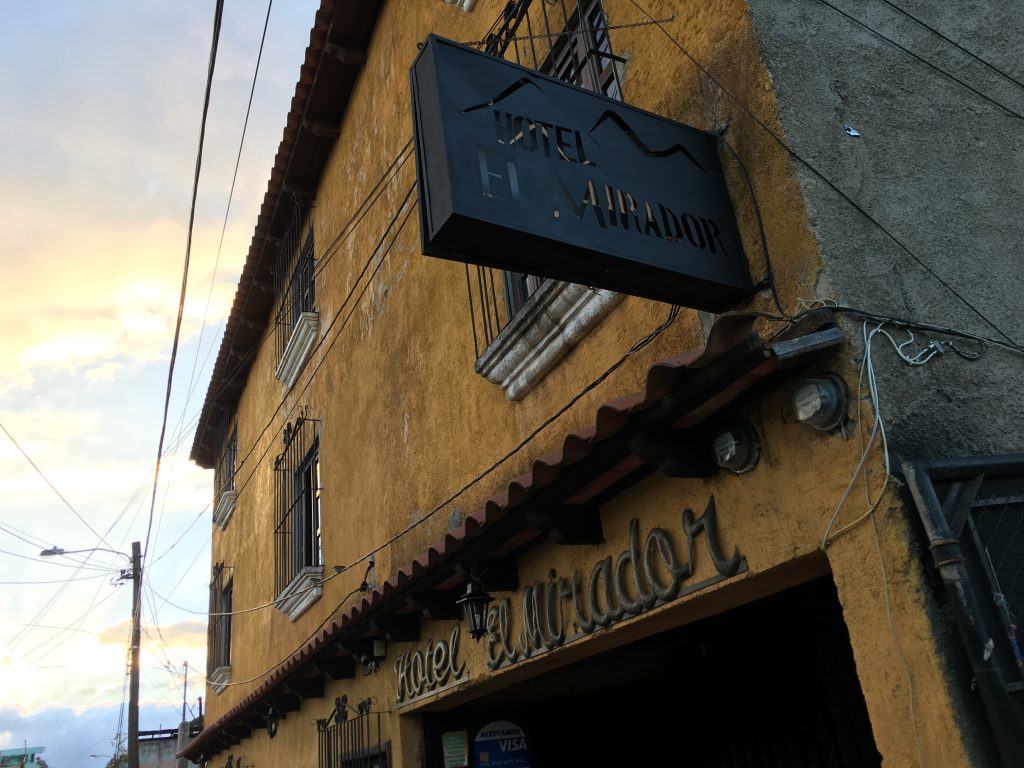 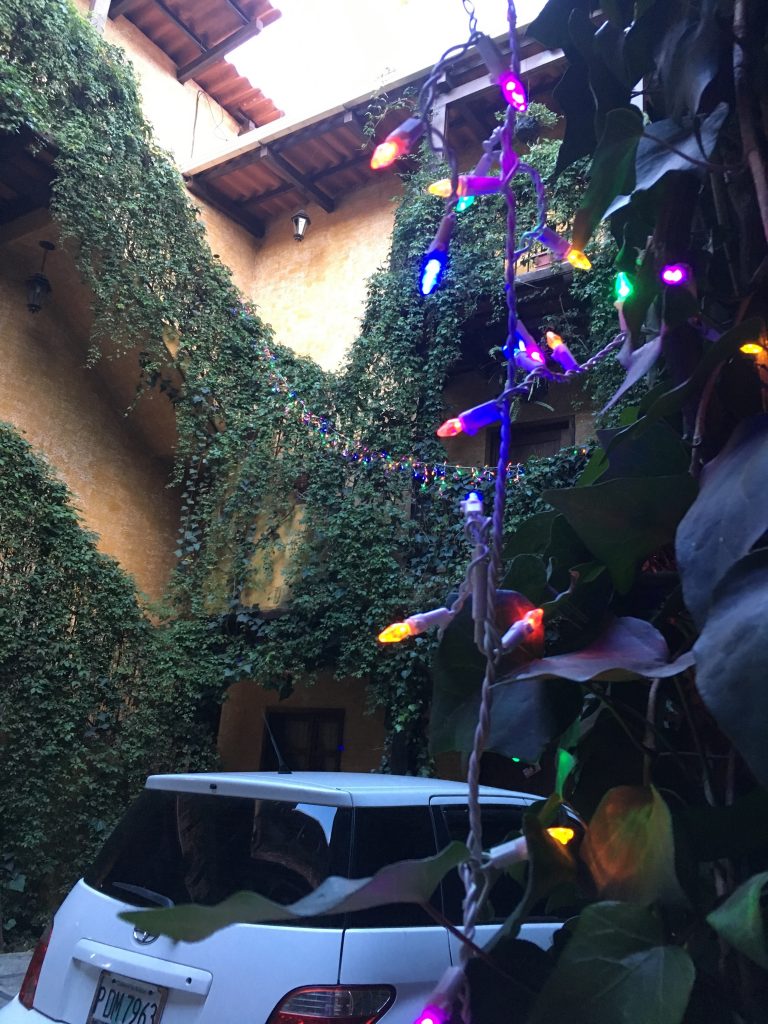 One big surprise upon returning to Peace Corps headquarters in SLMA (Santa Lucia Milpas Altas), was the recently constructed El Torre supermarket and shopping center about a two minute walk from headquarters. You can even see the new sign from inside the SLMA compound, here is a bit of it poking up above the roof tops from inside SLMA. Besides a full supermarket, there is also a place to buy crepes and hamburgers. 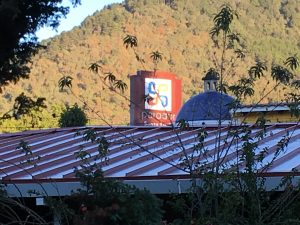 I’ve actually been told that the SLMA headquarters is the most expensive Peace Corps headquarters anywhere. Here is a photo of the entrance. 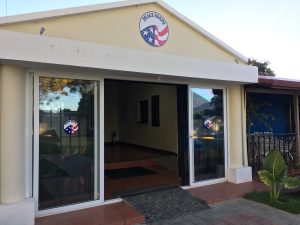 It was strange attending classes again at SLMA, something which I did a year ago for Pre-Service Training (PST) before I formally entered Peace Corps service, though it was nice seeing everybody in my training group, called ‘Bak’tun 6’, again.

Here is a picture of Gaby, an MCH volunteer, who was asked to ring the bell to call back the volunteers after a break, something we haven’t done for a year! 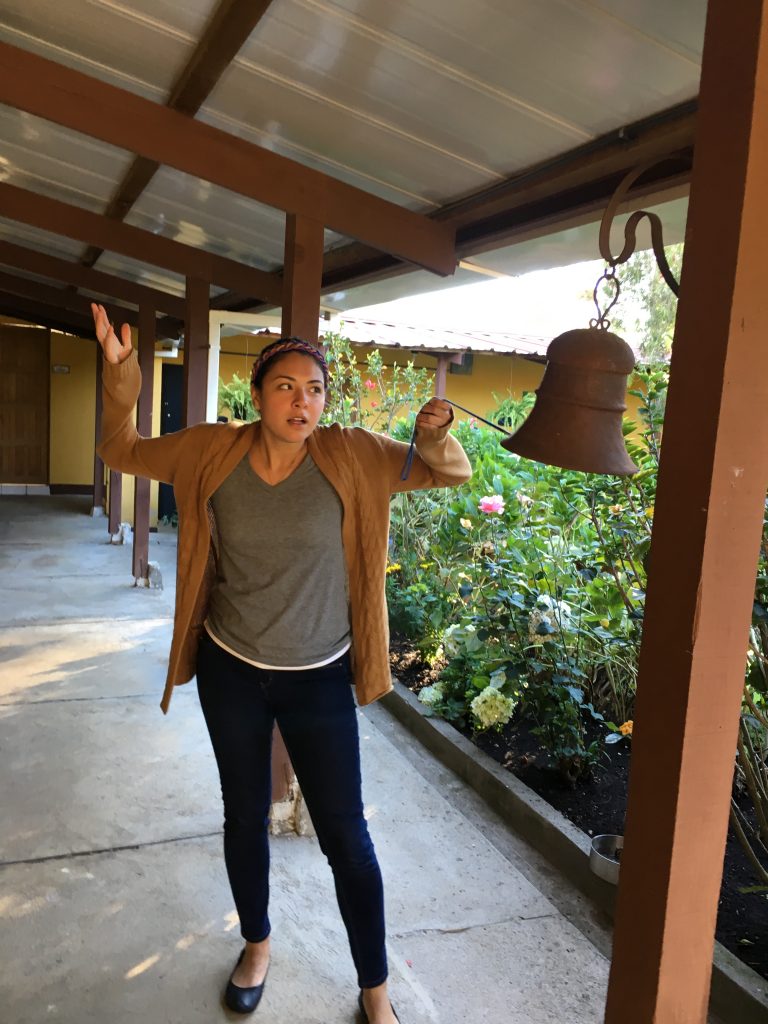 I visited my host family in Santo Tomas, a nearby training town that is close to SLMA, and even visited the health post in Santo Tomas, though the group of nursing students I met last year was nowhere to be found. I first passed through Santo Tomas over 16 years ago when I was studying and volunteering abroad in Antigua Guatemala, on my way to the Santa Lucia health post in fact, and figured that when I did Peace Corps they would probably assign me to a town like Santo Tomas! 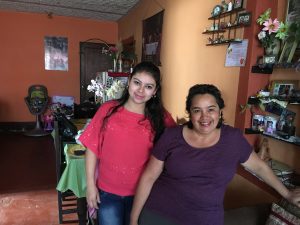 The church and central park in Santo Tomas look as beautiful as ever, though many new buildings certainly have sprouted up over the years. 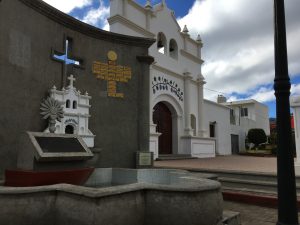 During MST, volunteers in the Maternal and Child Health program got a firsthand look at how planned changes in the Guatemalan health care system will affect our work here in Guatemala, and even who will be working in our health posts in the coming years. The “MIS”, or Modelo Incluyento de Salud, or the Inclusive Health Model, is expected to improve Guatemala’s delivery of primary care and empower auxiliary nurses to become more involved in the communities that they serve. 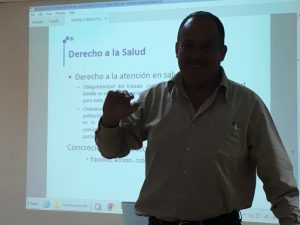 My most favorite government issued snack during PST was definitely the frijoles and salsa tostadas.

I also got to see some of what other volunteers are doing, and one MCH’er Bernie came up with a brilliant idea of using reminder slips to get women to come to her pregnant women’s group, something I will use in my site, though I also offer my cellphone to co-workers to send text message reminders. 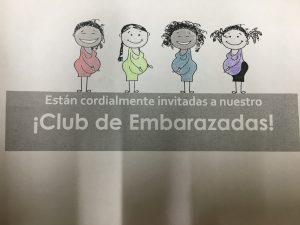 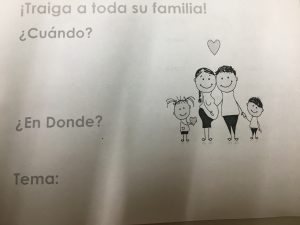 In general sessions for all volunteers, including people in the Healthy Schools and YID (Youth in Development) cohorts, we received presentations from the Med Office and Safety and Security briefings. I learned that the most common “secondary activities”, or things we do with our communities outside our formal place of work, was teaching english classes!

Sixty percent of PCVs here teach English classes, of which many are likely Healthy Schools and YID volunteers who already work in schools and for whom it is easier to arrange around their schedules. As an MCH volunteer, I am required to be in my health post, or health center, from 8:00 am until close around 4:30 pm, though I do take off time to teach women’s groups and do health assemblies.

We also got to meet the new Country Director, Alexis Vaughn, who graciously met with us for about an hour outside. We discussed issues such as the Peace Corps shuttle, and anything else volunteers wanted to discuss. 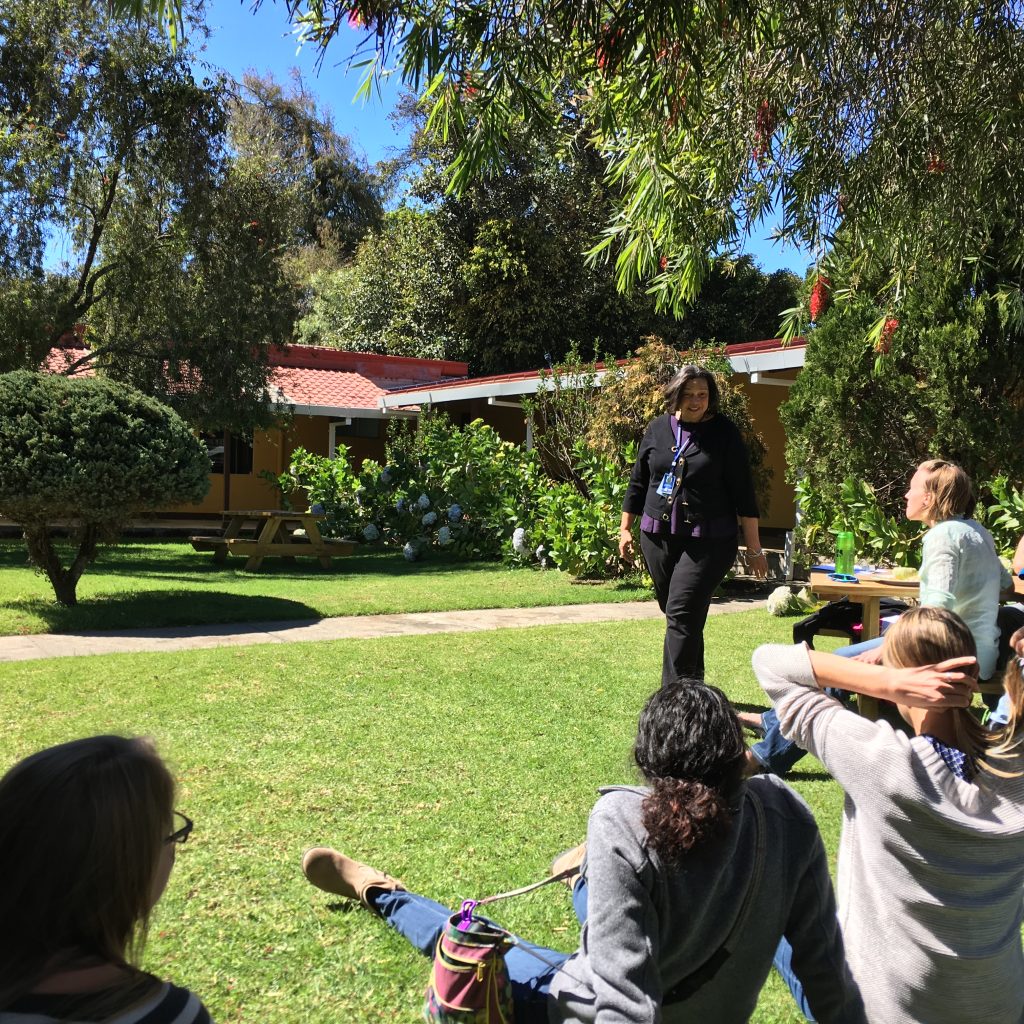 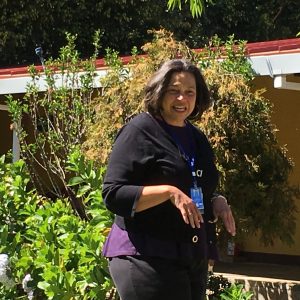 During one activity, the organizers placed signs with quotes that might represent how we feel about our service at this point in time, (Peace Corps encourages volunteers to do a lot of what they call “processing” about their experiences), and here are a couple of photos of these signs. 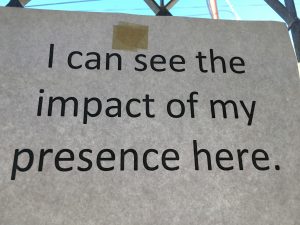 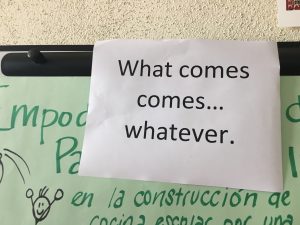 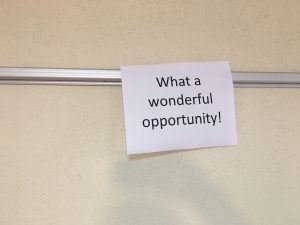 I think it was funny they put an “I made a commitment and I’m sticking to it” sign on the watercooler, as if this watercooler in the main training room decided to stick it out being a watercooler in one of the busiest parts of SLMA. 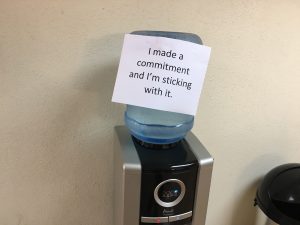 Given that water out of the taps must be purified before it is potable, many PCVs use this watercooler to fill their one liter water bottles each day with pre-sterilized government provided water, hence making this poor machine one of the most heavily used watercoolers on the planet. Let’s hope it’s ready for the 20 MCH volunteers coming this March!

The sign by the cake provided for a coffee break seemed apropos as I knew, 100%, that we would be getting cake in some form or another as SLMA loves to feed us cake. If you bring the cake they will come. 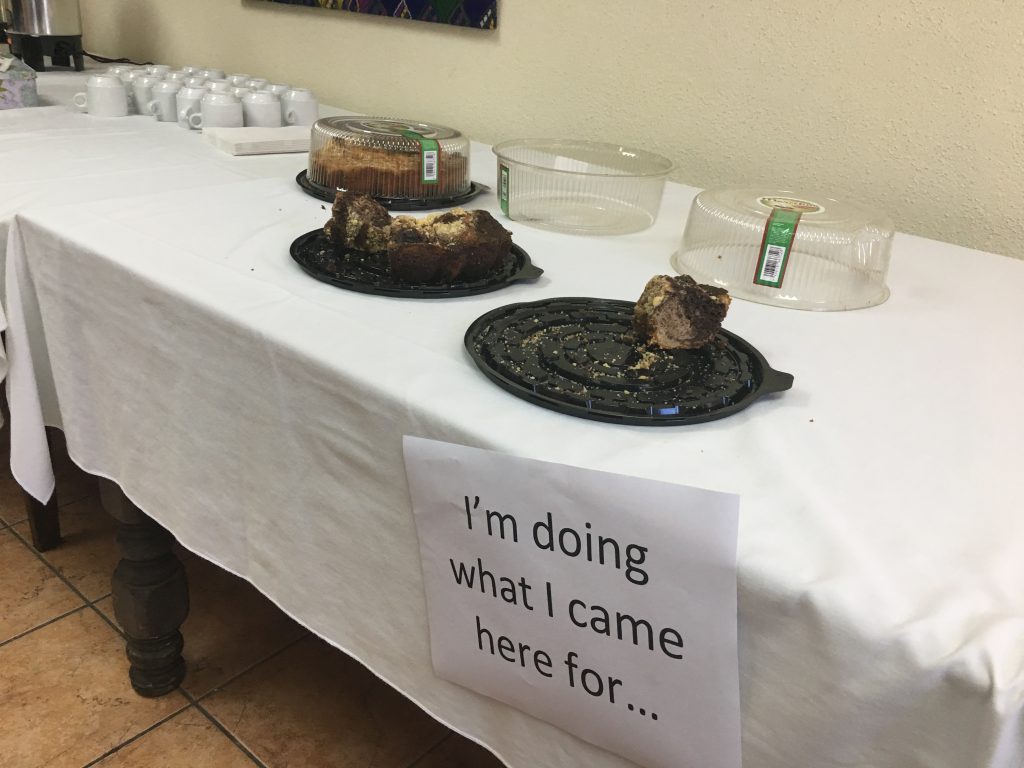 During MCH (Maternal and Child Health) meetings, we also were asked to draw posters with a timeline describing our highs and lows of service. 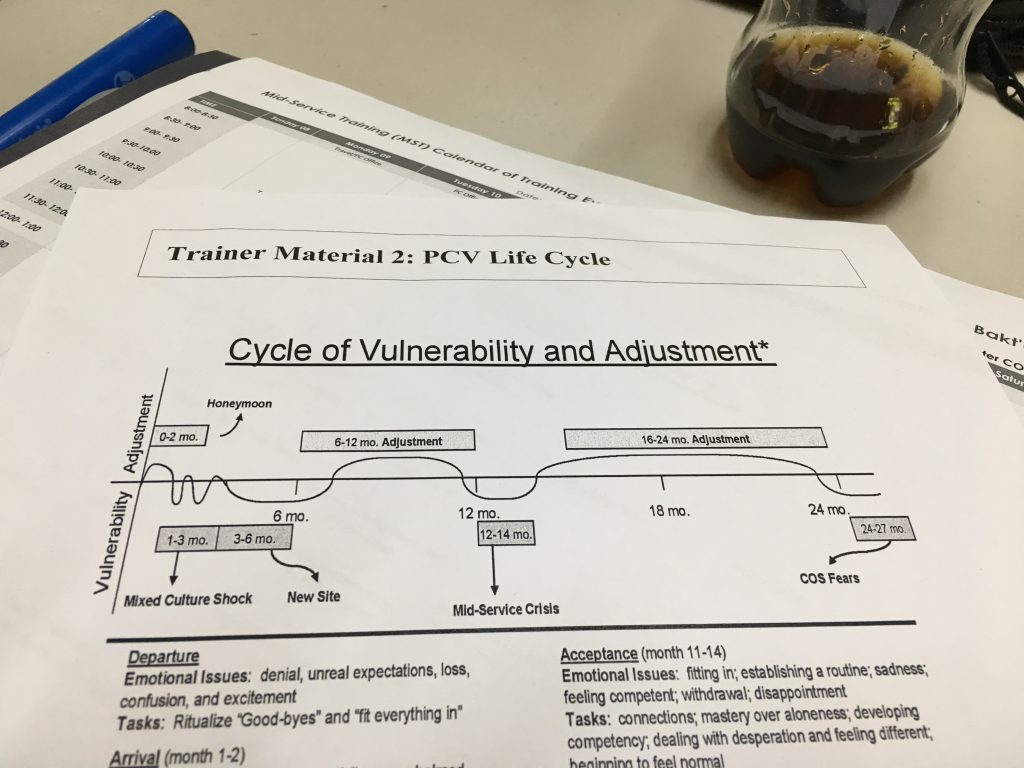 Personally, I’ve been more or less content during my time in site, with only occasional frustrations when the buses don’t run on time, and more often very happy moments when a health assembly or pregnant women’s group happens as it should.

Overall, there’s always something to look forward to, an official Peace Corps training, a health fair, health commission meeting, women’s group or health assembly in my town, though sometimes there are slow days. We get 48 days of vacation time over the two years, and I’ve only burned through 10 of them! I got 3 days back when I did work for Peace Corps in the states, and I planned on working extra hard my first year in site, and I worked a lot on integrating myself in my community.

I’m going back to the U.S. for 20 days in March, so I’ll have about 18 vacation days to burn between April and when I COS (Close of Service when I leave Guatemala) in November if I want. Technically, I could take-off almost four work weeks, but I’m actually going to be busier in my second year than the first one so that wouldn’t work very well.

I think it helps looking at your service in three month segments, instead of down a long tunnel with a light at the end that is two years away. Here’s is my mid-range life plan:

2. April-June. Work on any community projects resulting from PDML, Easter Vacation with Fellow PCVs, field-based training of Peace Corps Trainees in my site.

4. October-November. Say good-bye to people in my site.

One volunteer, Sam, does a calendar she has on an erasable whiteboard in her health center, which is much larger than mine, and tells people where she is and which she uses to coordinate with co-workers in her site. 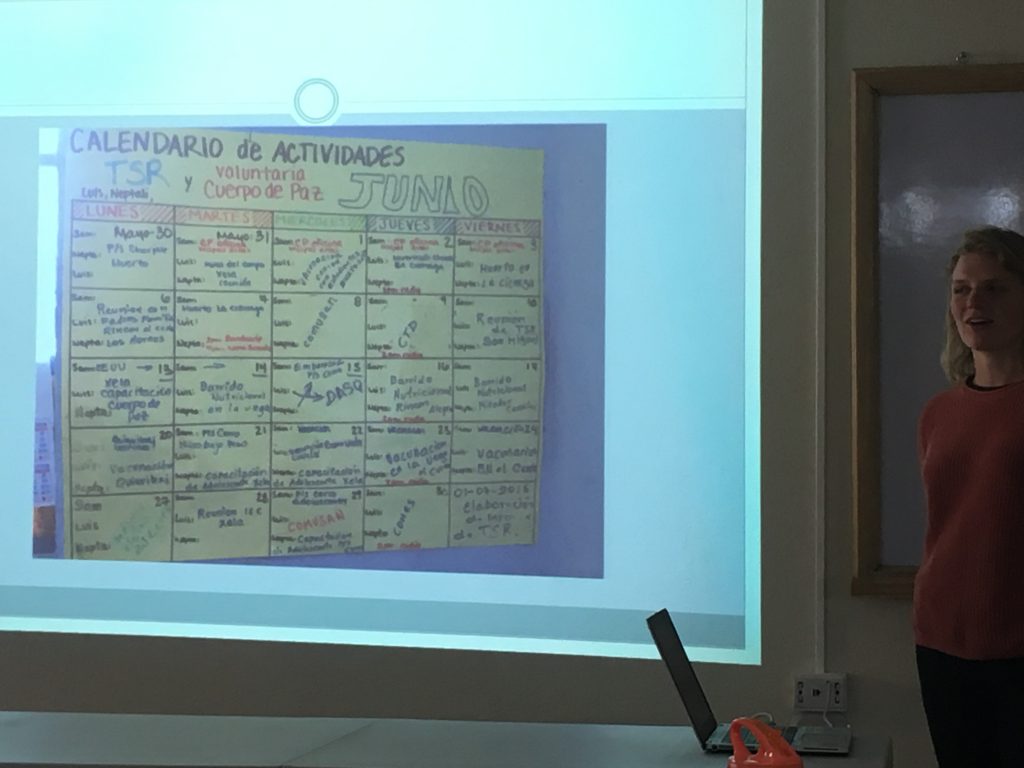 I have a monthly calendar that shows where I will theoretically be on a given day, but this changes based on what other people are doing. The folks in my health post know that if I’m not there, I’m in the health center, so they’ll call me if they need something from the health center as they know I’m in one of our health facilities. We have one big health center, and two smaller health posts.

On Friday, after four days of MST, I got on the morning Peace Corps shuttle with other volunteers for the 3.5 hour ride to the regional Peace Corps office in Xela. 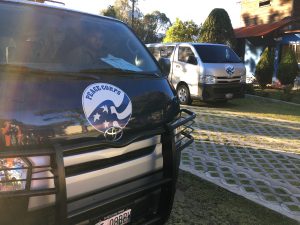 While I thought that this was basically it for MST, there was a last-minute surprise as our expected MST medical appointments we have to schedule in the coming weeks, so I’ll be returning to SLMA much earlier than expected . . . more to come!