Last week I arrived in my site after my training group’s MST (Mid-Service Training) conference at Peace Corps headquarters in SLMA (Santa Lucia Milpas Altas, and yes we use a lot of acronyms!), to discover that one of local health commission in my community was planning on traveling to city of Momostenango, simply referred to as Momos, for a meeting of health commissions sponsored by an NGO (Non-governmental organization, or ONG in Spanish), so I had to get permission to travel out of my site for the day and make minor changes in my schedule. As I frequently visit this community’s health post, I was invited to be part of the health commission as a vocal, or a sort of general member. 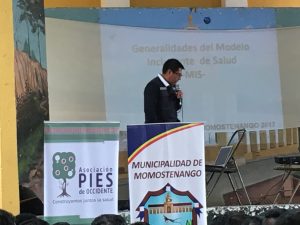 Although it is hard to see in this picture, there is a mural depicting two things that the department of Momostenango (like county in this part of Guatemala) is famous for: spectacular rock formations which draw in tourists and the production of wool garments and bedding. (One Saturday many months ago I traveled with my family to Momos to buy a wool comforter, and let’s just say that now its winter I am very satisfied with this purchase!) 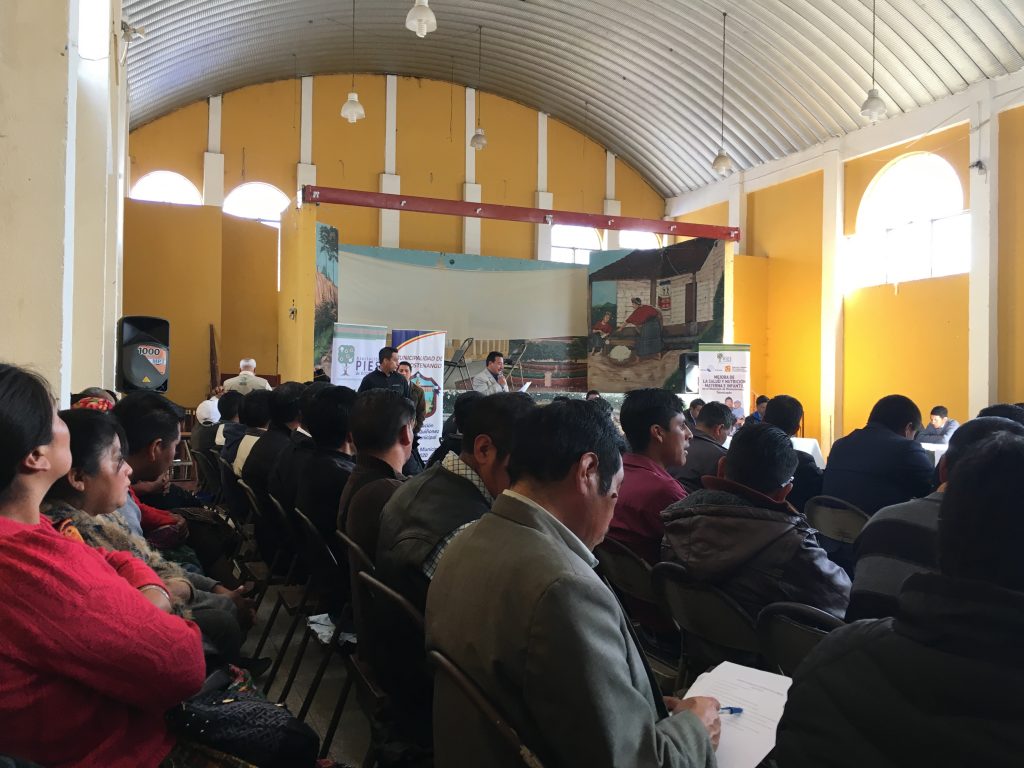 There have been some recent changes in how the Guatemalan Ministry of Health (nationwide entity) will organize their primary health care program in the future, and part of this meeting involves an explanation of the upcoming changes that will be implemented according to the MIS (Modelo Incluyente de Salud, or the Inclusive Health Model). There will be more of a focus on turning auxiliary nurses (similar amount of time spent in study as LPNs in the U.S., but they also do clinical office visits without supervision and dispense antibiotics), into mini-health educators. In the past the Ministry of Health has contracted with NGOs to provide health care personnel in certain areas of Guatemala, but this practice will end with the implementation of the MIS.

Many of the representatives of the communities present also took the opportunity to address Ministry of Health personnel present regarding certain issues with rural health centers and health posts, such as variable availability of certain medications, and a lack of health care staff in some areas of the department.

The PIES de Occidente workers, who are native Guatemalans and speak the local Mayan dialect of K’iche, also described a novel research project that they recently completed in the Momostenango department (the city and the department are both named Momostenango), regarding VCM (Violencia Contra Mujeres), or the various types of domestic violence against women which includes not only physical violence, but also when the man of a household controls the house’s finances and the wife must ask permission to even buy food for her family, and psychological violence. The PIES de Occidente worker said that 2 out of 3 women in Momostenango have experienced some sort of VCM in their life. 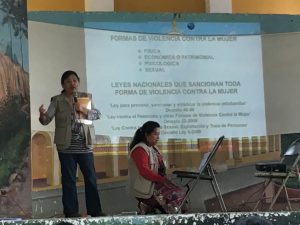 After the conference, I traveled back to my town with a nurse who is also on the health commission, and she told me that sometimes men change after marrying a woman, and begin to beat her and that there is little, if any, legal repercussions in such cases. She asked me if domestic violence was less common in the U.S., and I said that it does happen in the U.S., but that men can, and are, prosecuted in the U.S. though I don’t know the precise statistics. Peace Corps Guatemala has a lot of training materials on working with communities on gender disparity issues that impact Maternal and Child Health.

Later in the week, I decided to eat at a local comedor (restaurant) and found that the basket of corn tortillas, which accompany every meal served, was filled with blue tortillas! After the corn harvest in my site, it was obvious that a lot of families grow blue corn, and I find this interesting as blue corn may have 20% more protein than the regular yellow version, and have a better glycemic profile. As lack of protein in children’s diets is a major cause of chronic malnutrition here, I wonder what role blue corn products could, or does, play in regards to improving the nutritional intake of people living here. All in all, it was an interesting week! 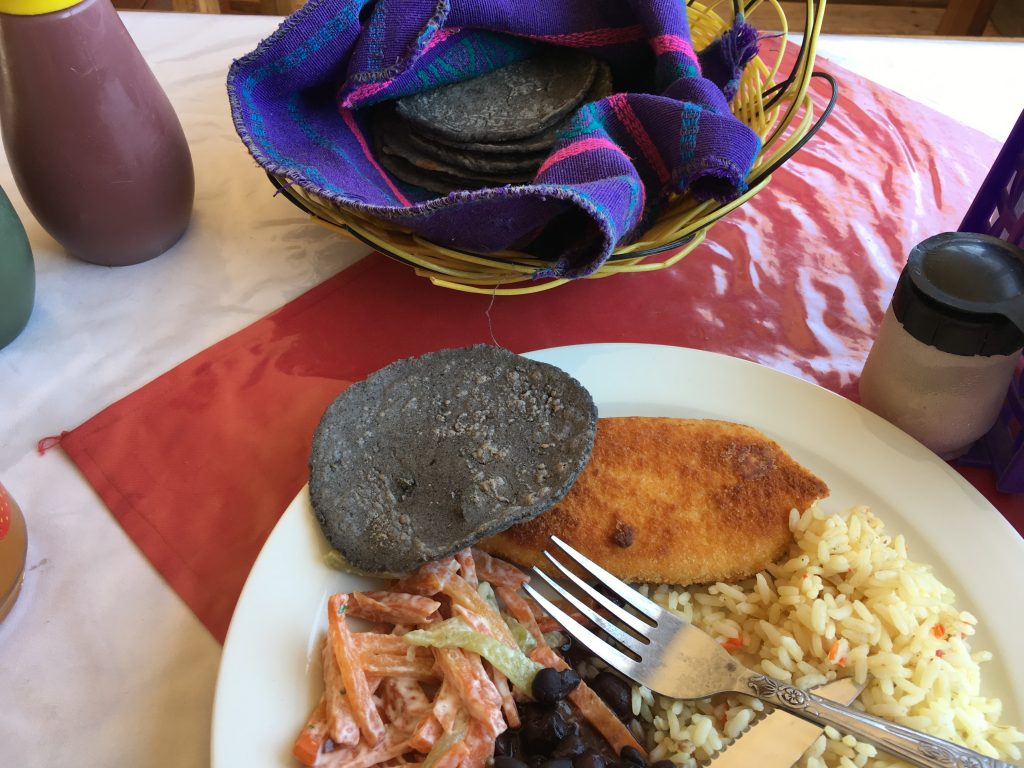 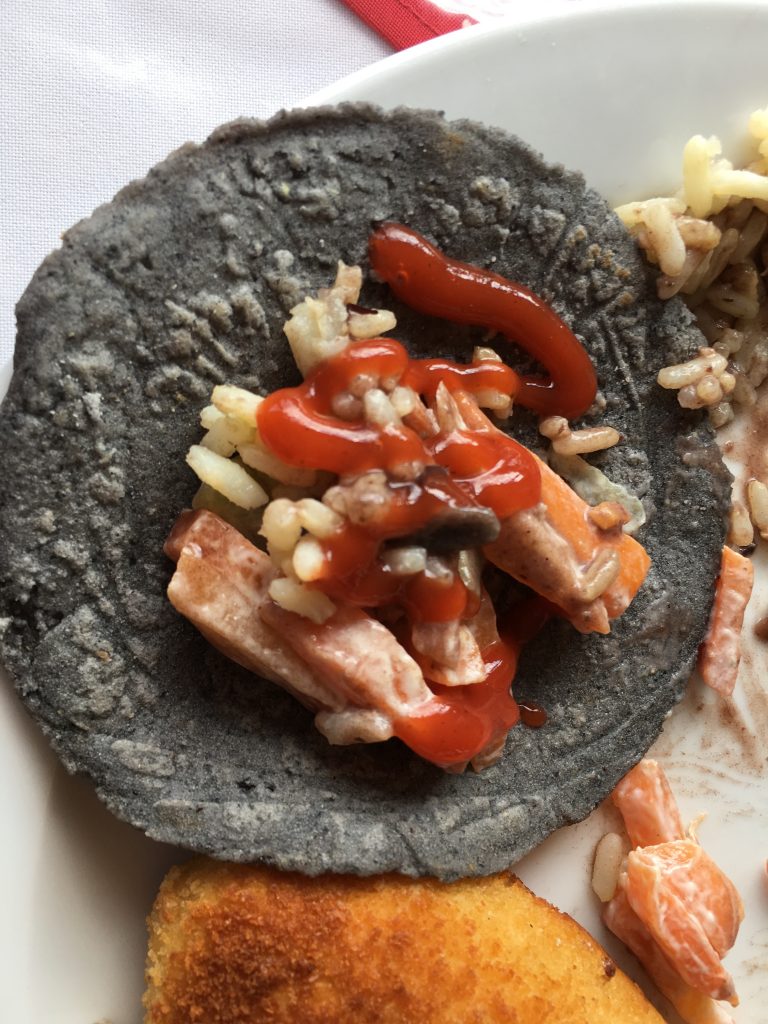