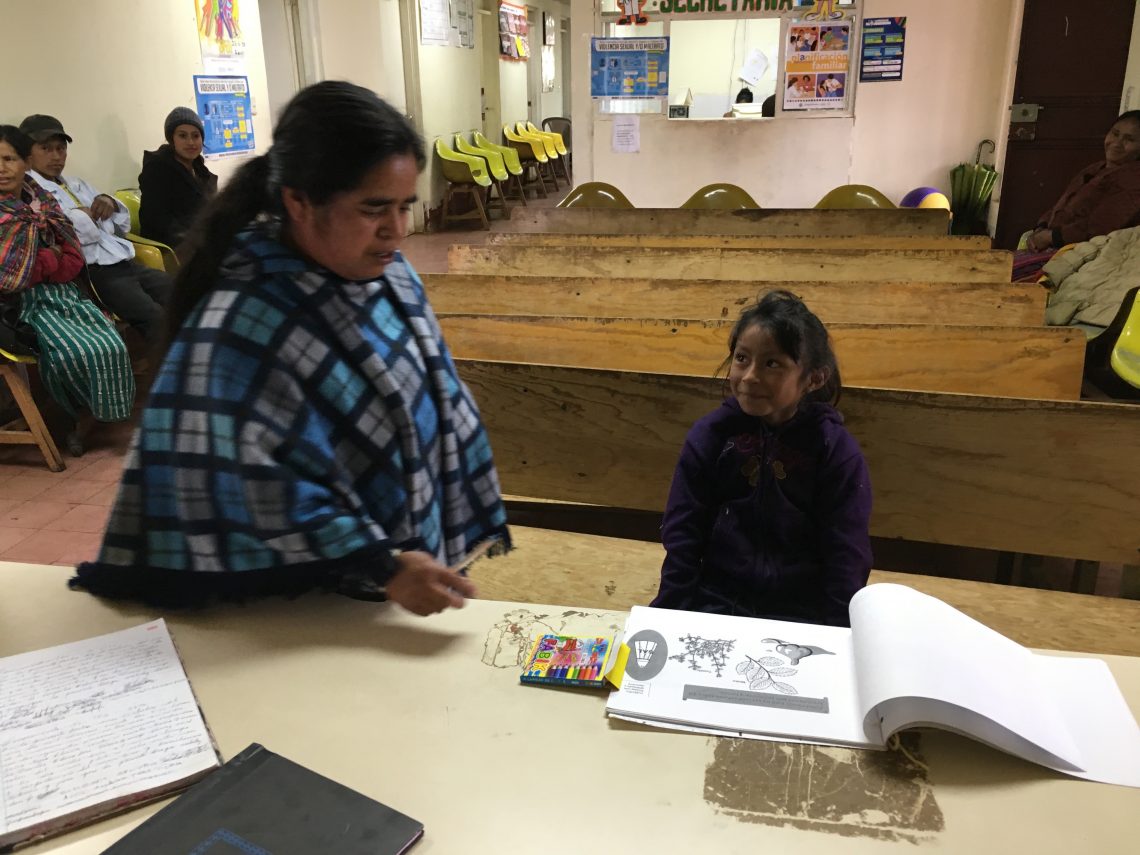 This blog post was going to be about the long anticipated start of the raining season in my town, or Part 2 of my trip to Guatemala City, but this past Thursday afternoon the completely unexpected happened. And not unexpected and bad in a Lemony Snicket’s Series of Unfortunate Events sort of way, but a sort of equal mixture of surprise, apprehension and wonder.

I got an international phone call out of the blue from an elementary school back in the states where I have been corresponding with several classes throughout this school year as part of the Peace Corps’ World Wise Schools program. The woman on the other end of the line asked me if I would be alright with answering some questions from a local news station as they were in the classroom interviewing a fourth grade teacher, Mrs. Ghori and her class at that very moment. I said ‘yes’, though I was still astonished, and I was shortly interviewed by a local news reporter for KOLD News in Tucson, Arizona.

Besides writing correspondence letters to Mrs. Ghori’s fourth grade class the past seven months, their teacher secured a grant to work on a project and I was fortunate that she decided to work with me and try coming up with something that could be used in my town in rural Guatemala. We decided to work on a coloring book for kids to use in the waiting room of my health center, with the hope that parents and their children would learn about good nutrition together.

Last March I made two visits to Mrs. Ghori’s classroom, first to observe the work in progress. 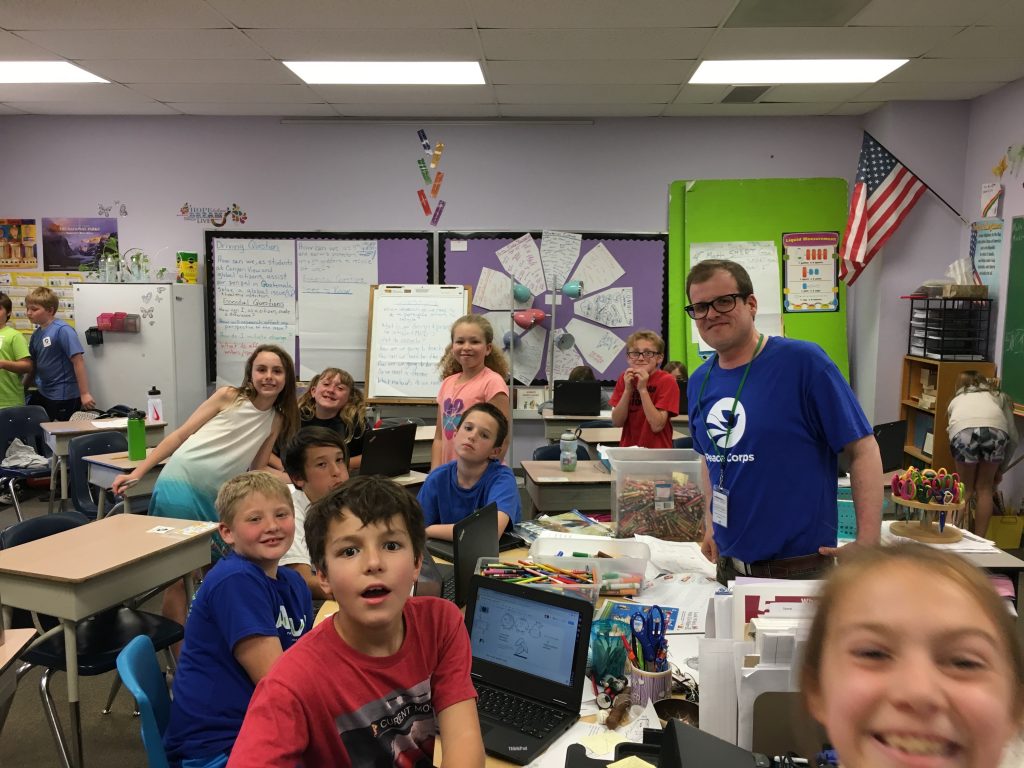 And a final second time to collect the printed coloring books, (a PDF version of the coloring book was also emailed to me), and I took them with me in my backpack to Guatemala. 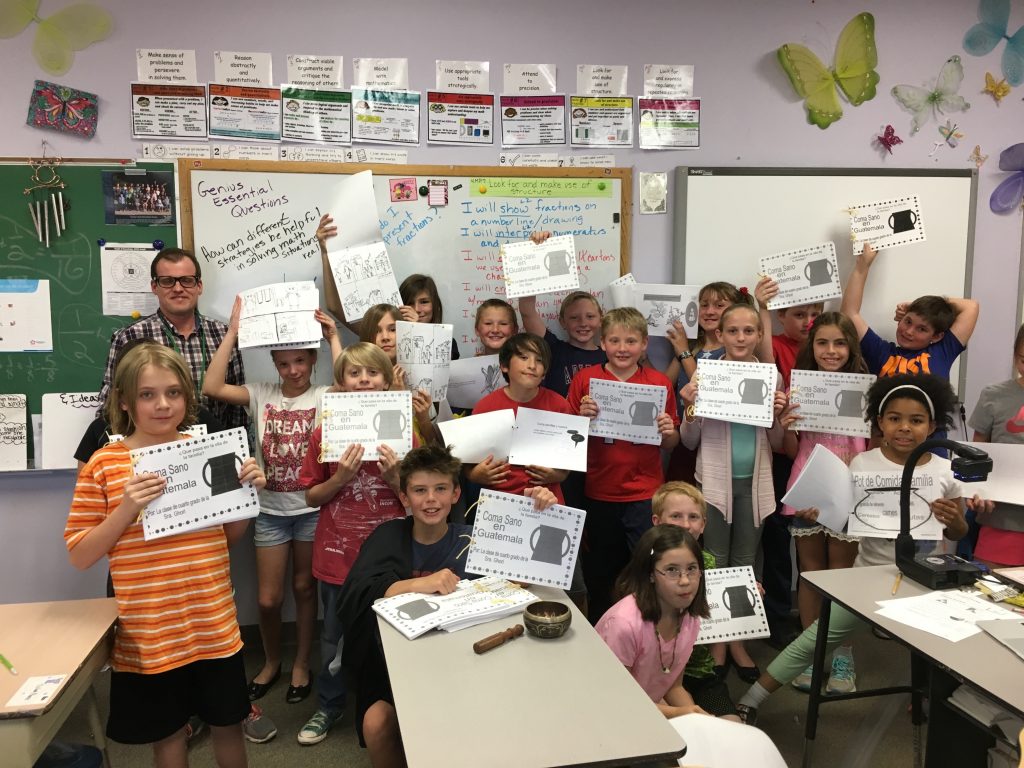 I actually didn’t bring any checked luggage with me as my airline is charging to check baggage now, (oh how times have changed since leaving for Guatemala in 2015, free Wi-Fi on flights but your luggage has to pay to ride in the unheated cargo hold), and also losing international luggage would be a real hassle.

It was this coloring book project that the reporter was most interested in, and so I focused on explaining how my work through Peace Corps Guatemala can be strengthened by the use of said coloring book, which through a number of different drawings encourages children to eat a balanced diet and also to exercise, though the critical part is to have a quality conversation with the child while he or she colors away to their heart’s content. 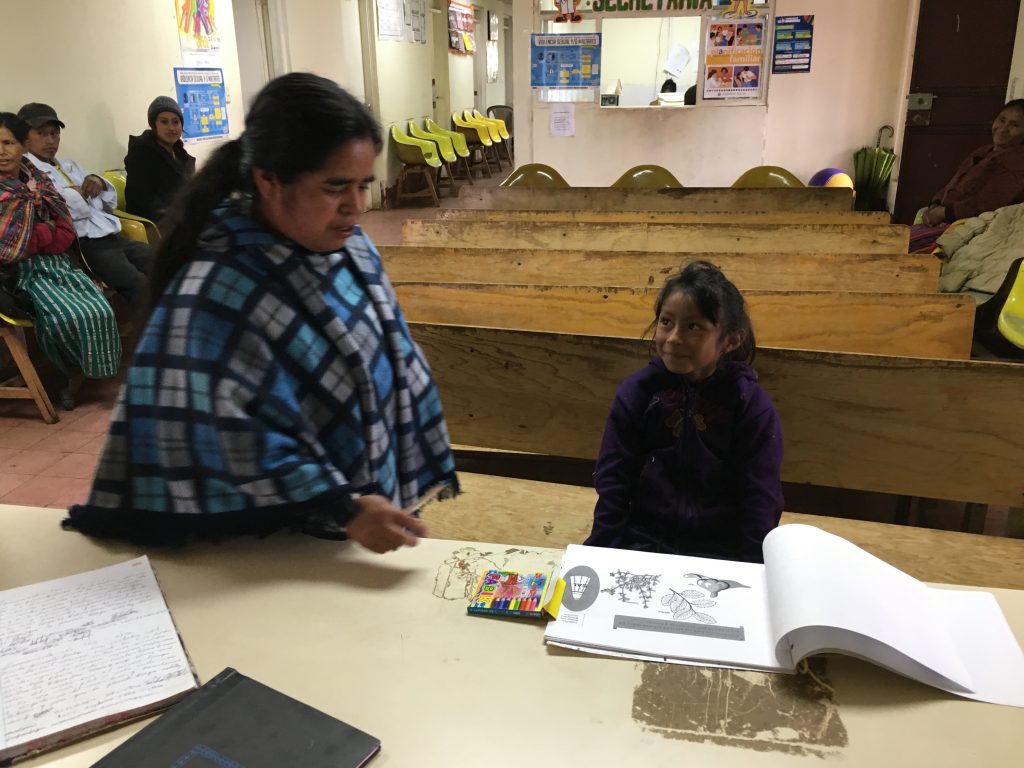 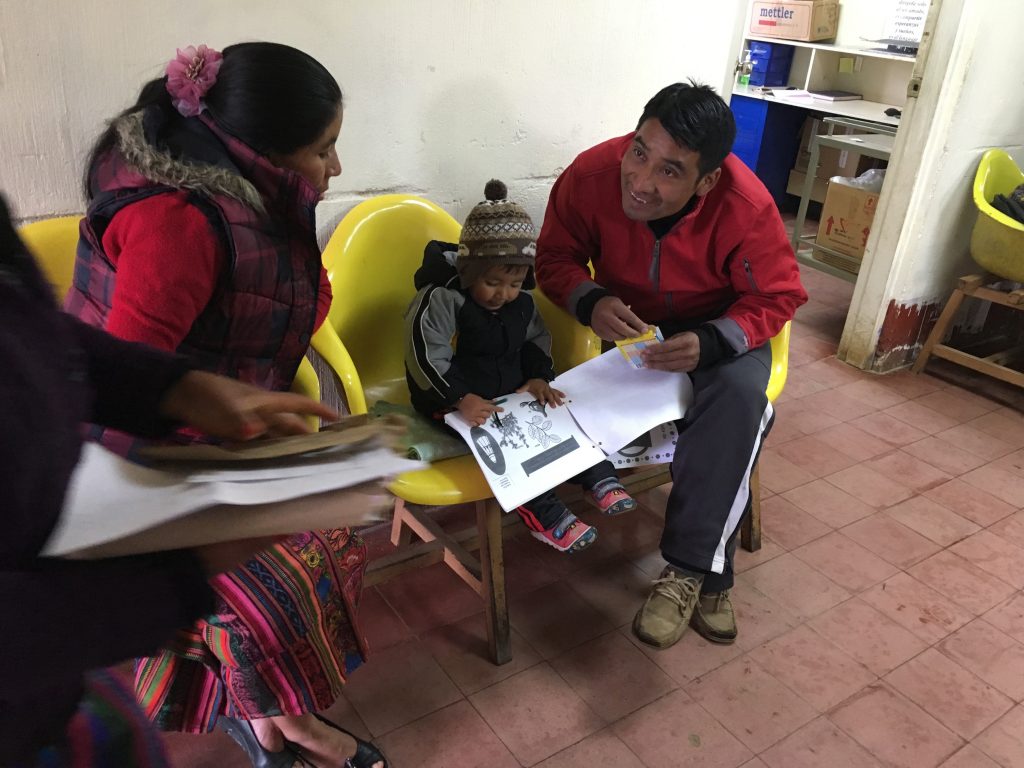 I also worked with the health educator at my health center to give a short health talk on nutrition, including asking parents and their children their thoughts on a balanced diet, and then to explain the coloring books to the children and their parents. She suggested that I use the bulk of the coloring books for an upcoming women’s group meeting in an outlying community next week.

Here’s the front cover of the book. 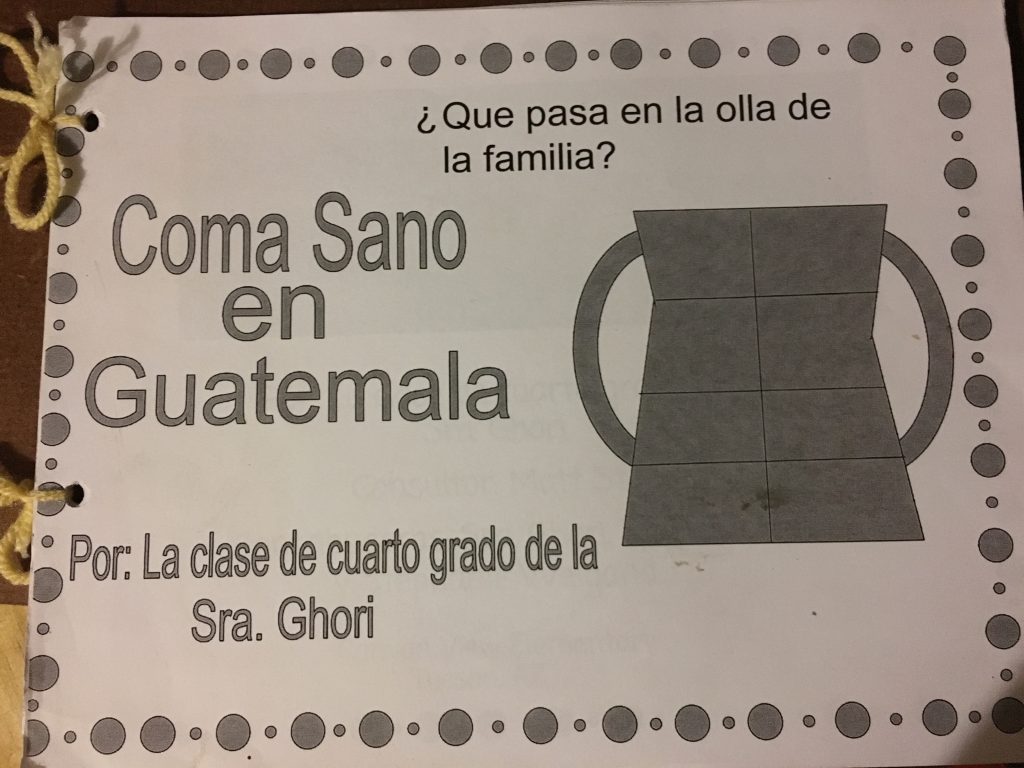 Some interesting examples of pages in the book are the Guatemalan flag, which every school-age child in my town knows uses the colors of ‘white’ and ‘sky blue’, as well as a page of fruits and vegetables that kids go bananas over (pun intended!) The waiting area in the health center can be boring, both for kids and their parents, so it was also nice to have something available for them to work together on while they waited. 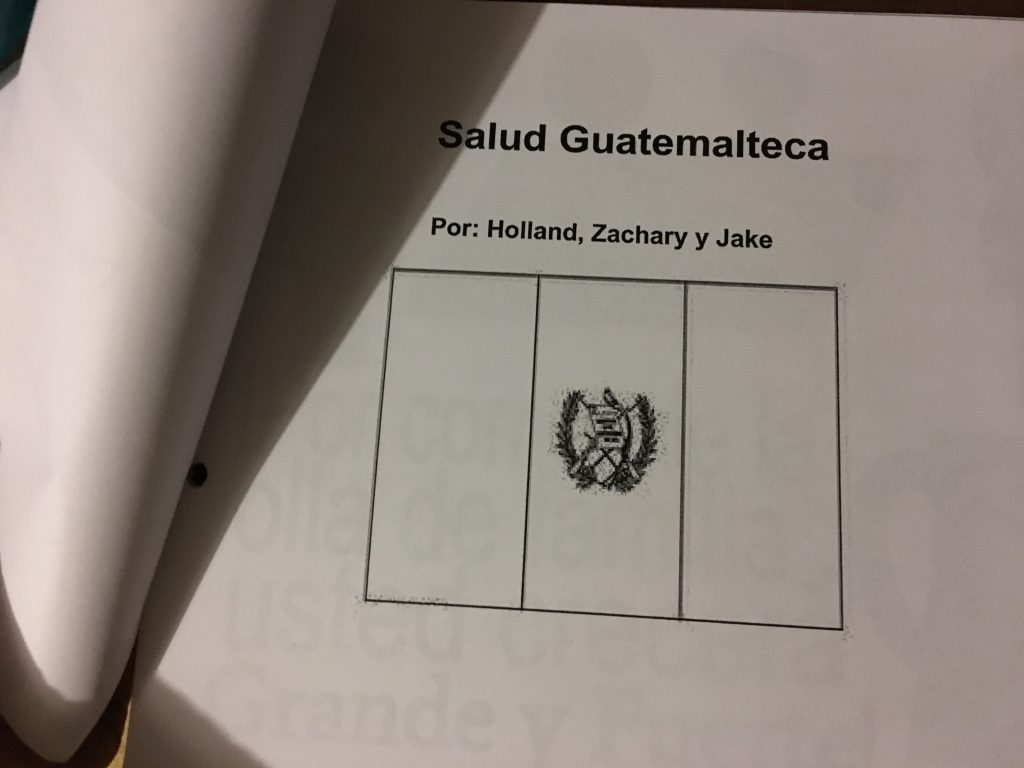 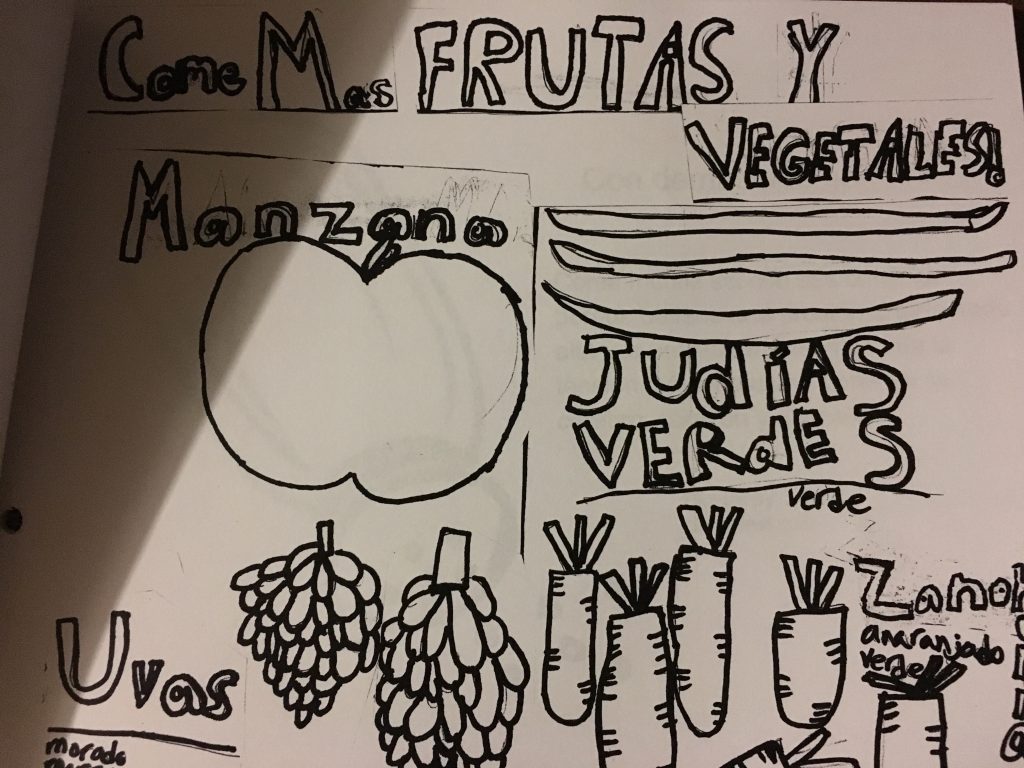 Here’s a link to the local news piece about our coloring book project.

I could have talked with the reporter for more than a couple minutes about chronic malnutrition in Guatemala, though of course my conversation with her was edited down to the most summative and pertinent statement.

The paradox of chronic malnutrition in Guatemala, (where 1 in 2 kids under the age of five are malnourished, and it is actually closer to 70% in my area of Guatemala), is that despite a large amount of agricultural activity in the country, and the status of Guatemala as a lower middle income country, the prevalence of chronic malnutrition is much higher than what would be expected on these facts alone.

So, part of the work of Peace Corps volunteers here is to increase awareness of the high rate of chronic malnutrition among children in our communities, and also to provide awareness about food choices that help ameliorate, or mitigate, a child’s deficient growth, such as by increasing the amount of protein and fruits and vegetables in a child’s diet. The number one food choice in my town is easily corn products, such as corn tortillas or “chuchitos” (like a tamale, but with little, if any, meat and pictured below) which while they provide carbohydrates, they are a poor source of protein and lacking in certain vitamins and minerals. 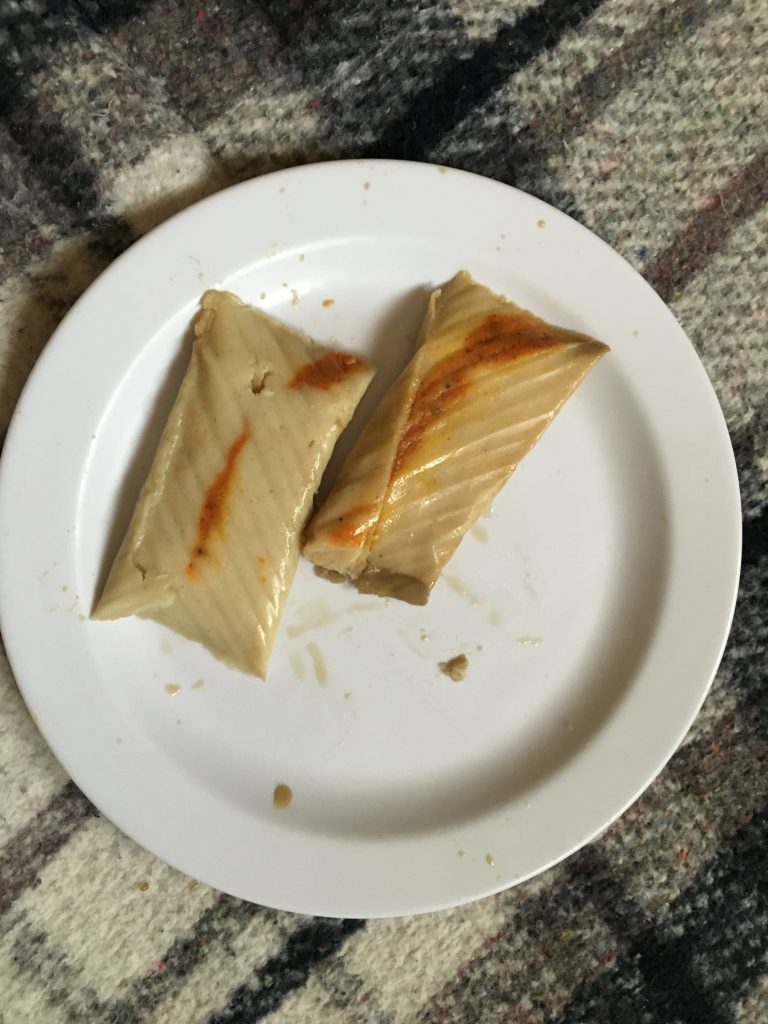 Helping to facilitate improved interaction between parents and children may also produce positive heath benefits of its own. A PhD student recently completed a research project in my town, and one of the conclusions drawn from the collected data was that increased quality interaction between a mother and her children was associated with a lower risk of the child having chronic malnutrition. Here’s a picture of me and that grad student, Lee, riding in a “tuk-tuk”, or motorized rickshaw. We look serious because the research made our brains produce a lot of deep thoughts! 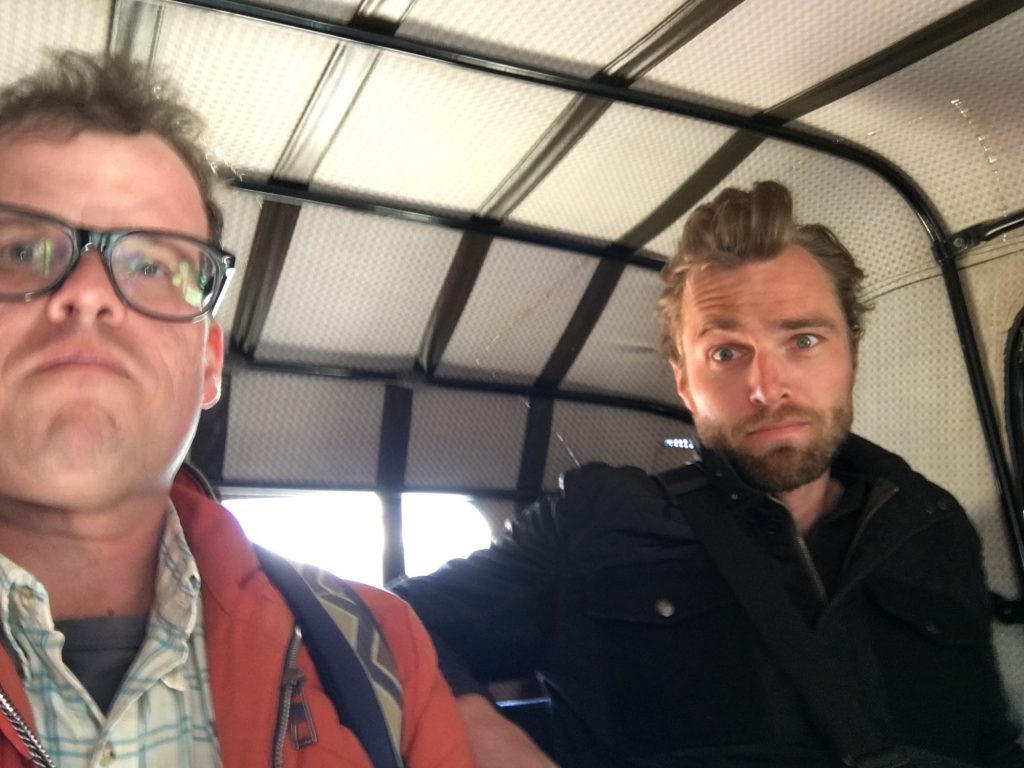 This correlation between maternal attention and chronic malnutrition may, or may not, be causative in terms of preventing chronic malnutrition, but it is true that maternal attention, for example observing how successfully a child is breastfeeding, is important information for the mother to be able to take into account when evaluating whether her baby is getting enough breastmilk. So, it was great to see parents bond a little more with their kids while they worked on the coloring book!

So, this Thursday I was definitely glad I had my cellphone charged and close at hand, which is actually standard protocol for Peace Corps Volunteers as we occasionally get important text message, such as when a nearby volcano has a major eruption. Hmmm . . . volcano eruptions and the press calling me . . . I’m getting a lot more interesting phone calls and messages than in the States!