The Benefits and Pitfalls of the 1,000 Day Window

I recently ran across a YouTube video very pertinent to people working on childhood stunting in the developing world:

This video (with choppy audio) is an academic presentation done by Peter Rohloff, MD, PhD, Chief Medical Officier, Maya Health Alliance, Instructor in Medicine, Brigham and Women’s Hospital and I was surprised to find that Dr. Rohloff had some similar conclusions to myself regarding malnutrition in Guatemala, specifically that there are a lot of promoted “magic bullets” aimed at trying to fix chronic malnutrition in Guatemala and that the consensus (a global health consensus) that the 1,000 Day Window concept should be pushed as the solution for chronic malnutrition was a compromise made by donor agencies on a global level and that some children are left behind.

It is a sad fact that childhood chronic malnutrition (or stunting) in Guatemala is the 6th highest in world, and in my former site the percentage of affected children was around 70%, which translates into impaired development in the life of these children which can lead to poorer achievement in school and chronic health problems later in life. Although there are various developmental and psychological tests that could be used, stunting also causes a noticeable and measurable decrease in height, so this is what is measured to get an idea of the scope of the problem.

A lot of the international players working on ameliorating chronic malnutrition in the developing world have reached a consensus that the first 1,000 Days of Life (pregnancy and to two years of age for the child) are the most important for childhood development in terms of preventing chronic malnutrition and that interventions later in the life of the child may be much less useful. Various nutritional supplements are produced and distributed to key populations of pregnant women and children with the hope of preventing stunting: 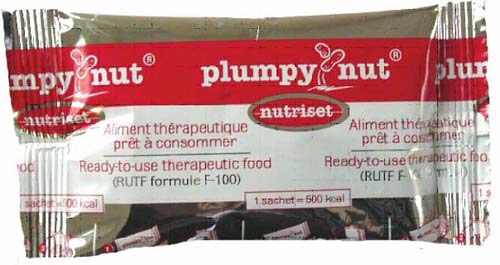 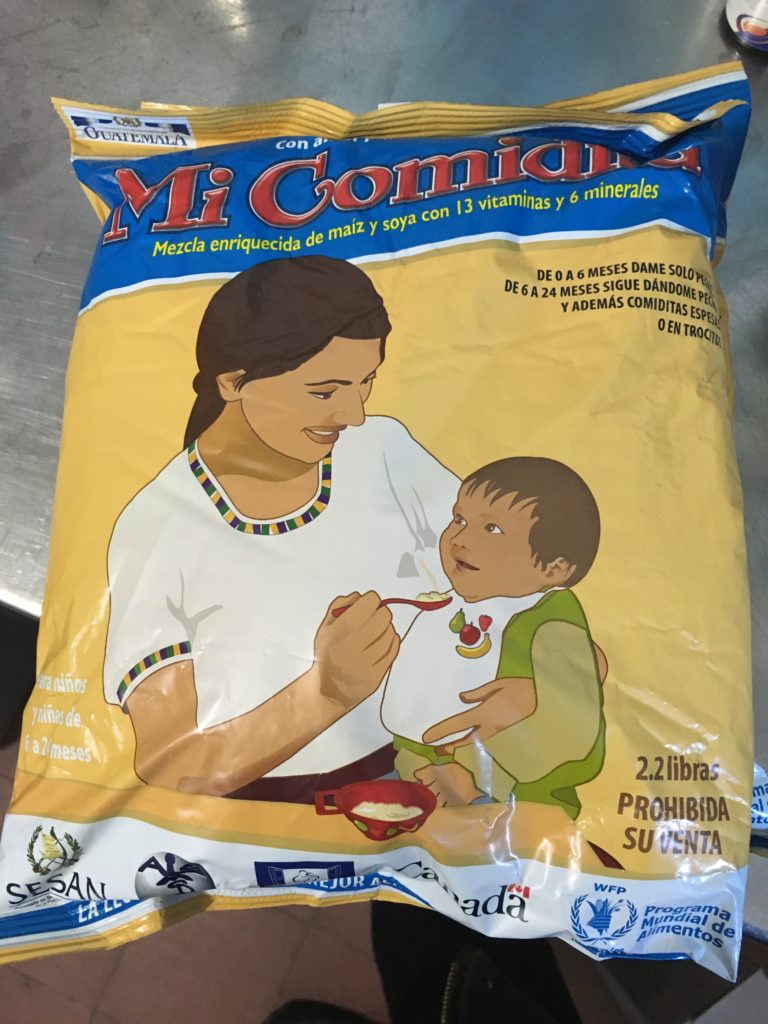 There is the idea that once the 1,000 Day Window is passed, there is much less of an opportunity to prevent stunting, which is true to one extent or another. However, Dr. Rohloff notes that the 1,000 Day Window program might not play very well in Guatemala where there is a large, and growing, cohort of children above 2 years of age who are stunted, but for whom the 1,000 day window has passed. Can anything be done for these children? 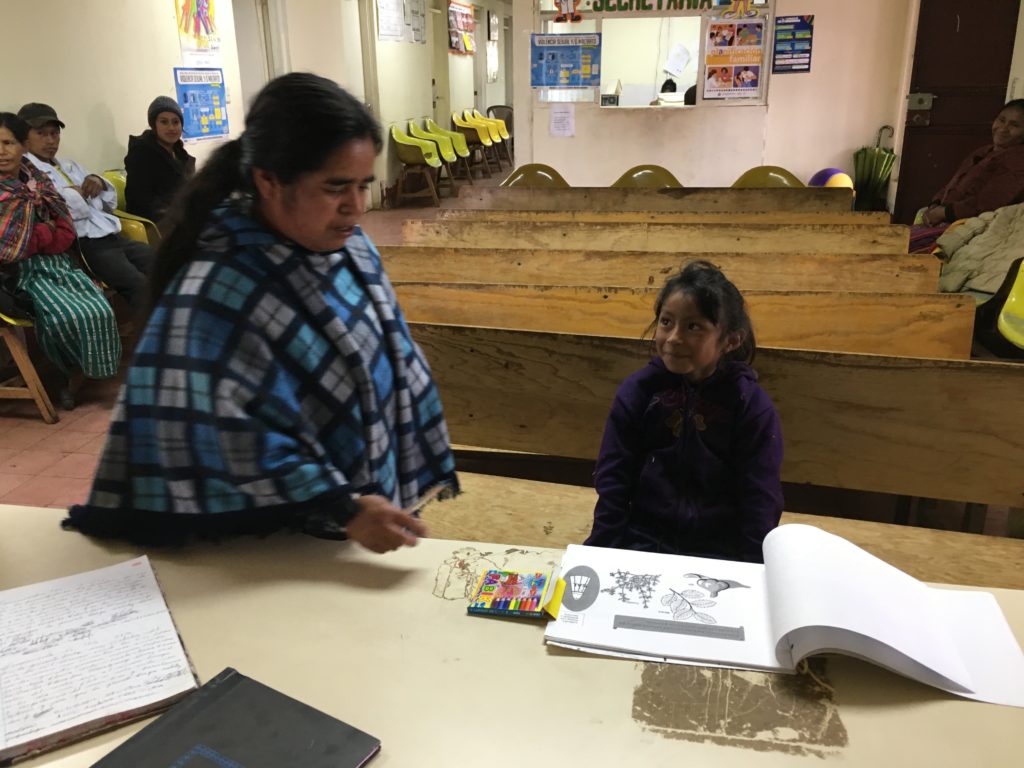 One research article I found when I started Peace Corps service in 2015 in Guatemala showed that for children, at least in Guatemala and South Africa, that some catch-up growth happens even without nutritional interventions. Possibly, very young children (less than 2 years) are less able to advocate for food for themselves at the dinner table and they might be more susceptible to infections. Here is a graph showing that children in many different countries slow down in their growth (this slow-down often starts around 6 months of age when children should be beginning to add solid foods to their diets), and slows down the most around 24 months of age, but after this time there is a recovery in growth and children catch-up some (though not completely) to where they should be: 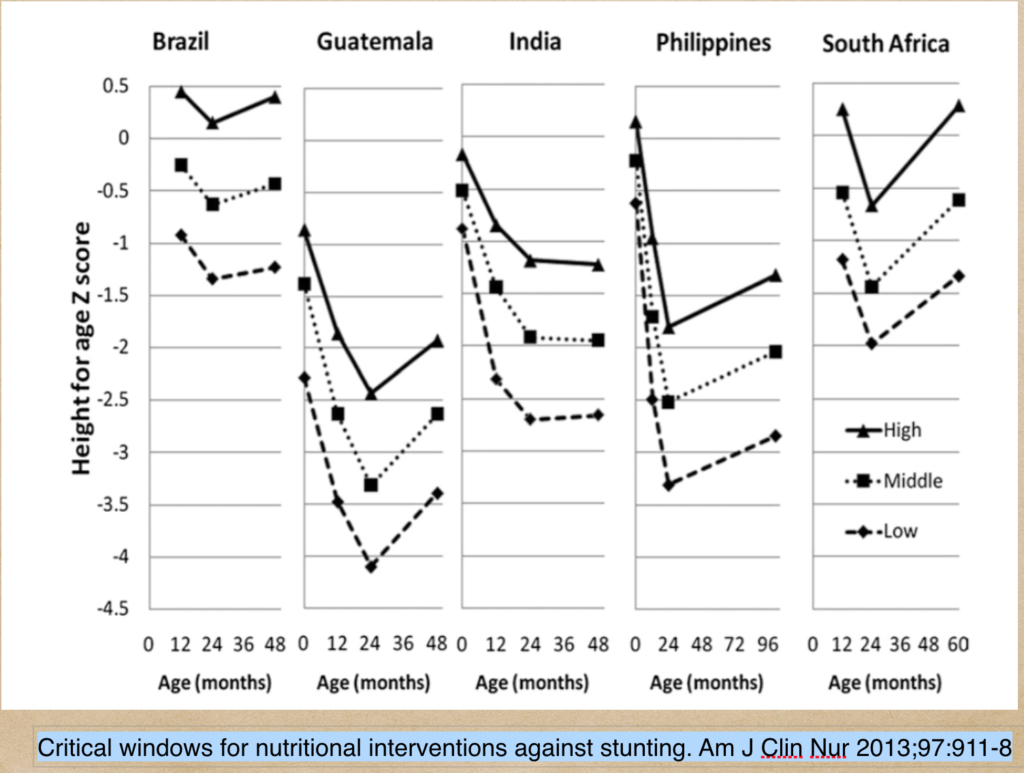 Critical windows for nutritional interventions against stunting. Am J Clin Nur 2013;97:911-8. The Z-Score here is how many standard deviations below the mean the child is for their height when compared to healthy children of the same age.

For children in India, there doesn’t appear to be a large amount of catch-up growth, but this happens in Guatemala without any intervention.

When I was volunteer in a health center in a rural town in Guatemala, where the 1,000 Day Window was heavily promoted, there was a mother who brought in her 3 year old child who had severe stunting due to chronic malnourishment. The doctor explained that if the child was less than 2 years of age (and hence inside the 1,000 Day Window) the child would be eligible for vitamins provided free of charge to the clinic through a USAID program, however, as the child passed the 1,000 Day Window he would not receive vitamin supplements and there was much less chance of the child being able to achieve a normal height! The mother was confused and asked if her child would stop growing! The doctor laughed and said “of course not”, but that it will be much harder for the child to reach a normal adult height. This might well have been a missed opportunity as according to the data from the above mentioned article, the child will be expected catch-up some lost height. 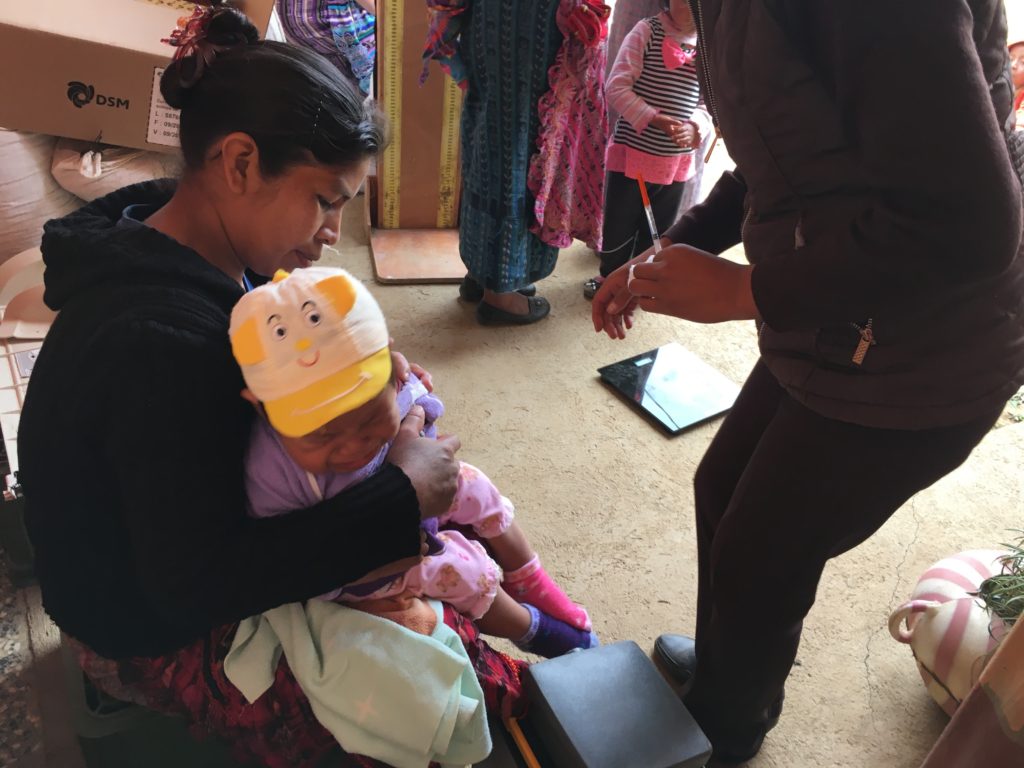 This makes sense as doubtlessly human beings have survived for hundreds of thousands of years, in pre-historic times, years when there were poor harvests and children’s development stalled but could catch-up, to some degree, during a good harvest in subsequent years. While overfeeding children, (possibly especially children who have been malnourished), with too many calories might lead to obesity and diabetes later in life, children who are malnourished in the United States are given energy and nutrient rich food in order to regain weight and their catch-up growth is monitored by doctors in rare instances of chronic malnutrition caused by insufficient consumption calories or a nutrient poor diet in the U.S..

The reason as to why there is such a high prevalence of chronic malnutrition in Guatemala is undoubtedly multifactorial, and there might even be independent pathways which lead to a child becoming malnourished such as only correcting one pathway, such as a deficiency of vitamins or important micronutrients like zinc, might not be enough to see a large change on a population level.

Even in my town there existed the idea among the residents that Guatemalans are “Chapparitos” or shorties, due to this being an inherent characteristic of indigenous populations. However, scientific studies this century have disproven this notion, and in fact reinforced the idea that for all children, at least in early childhood, growth in height should be about the same. As a graph from Dr. Rohloff’s talk illustrates: 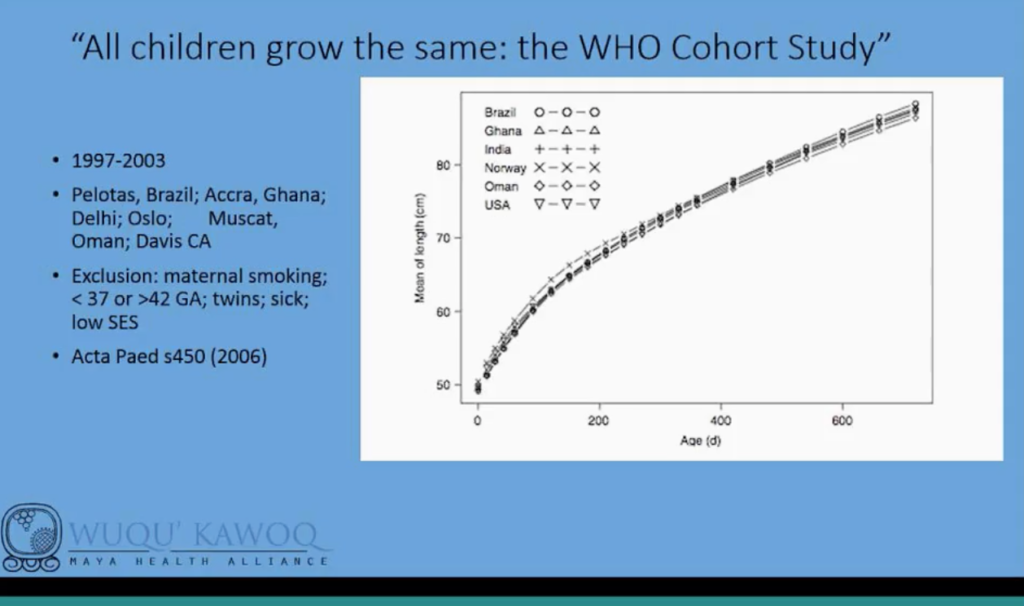 Basically this graph shows that children from birth to around 2 years of age, irregardless of ethnicity or location, will have, more or less, the same length (height) if they don’t have anything that can impede their growth, or if they’re not born premature (and small) or born very late. Very convenient as anywhere in the worlda you can plot a child’s growth on a growth chart and determine if they’re growing at a normal rate. 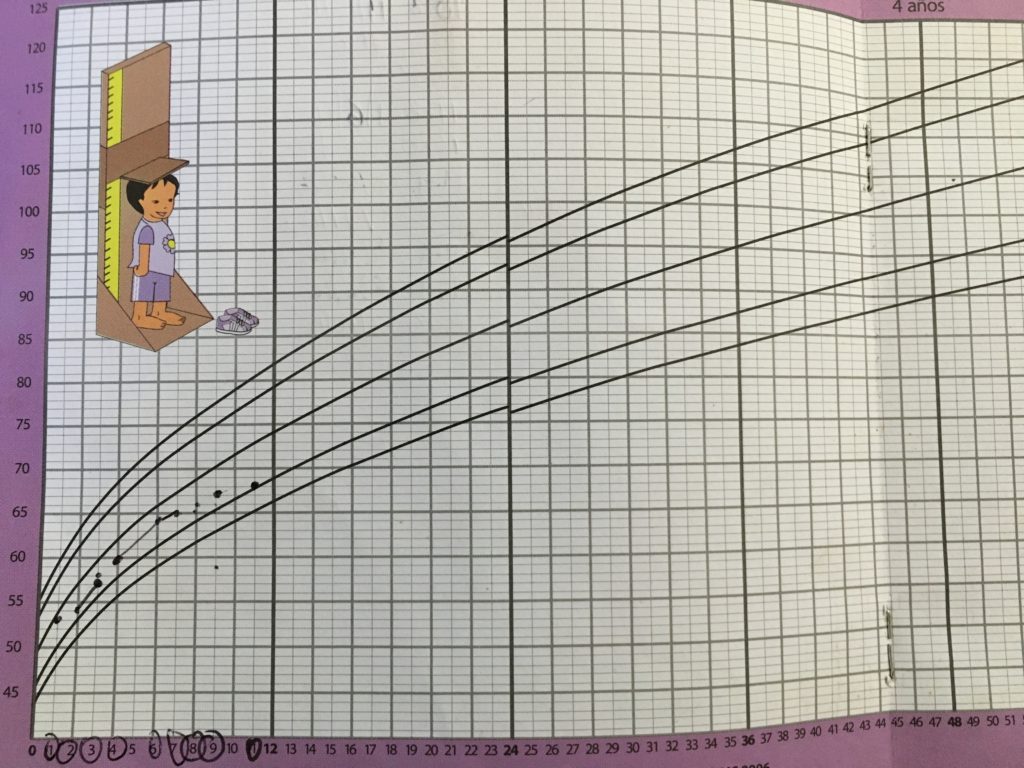 Alarmingly, the vast number of stunted indigenous children in Guatemala is due to environmental factors (not their ancestry) such as access to clean water, balanced nutrition with sufficient protein, fruits, vegetables, key micronutrients such as vitamins, minerals and essential fats.

Conclusion: Improving the nutrition of pregnant women and young children is extremely important and the 1,000 Day Window is an important intervention, however in populations in which stunting is multi-generational problem with a high prevalence and not amendable to easy correction in the first couple of years of life for the entire cohort of young children, emphasis should also be placed on maintaining and improving nutrition throughout childhood.

COS: Closing Out Peace Corps Service and Bell Ringing Ceremony!