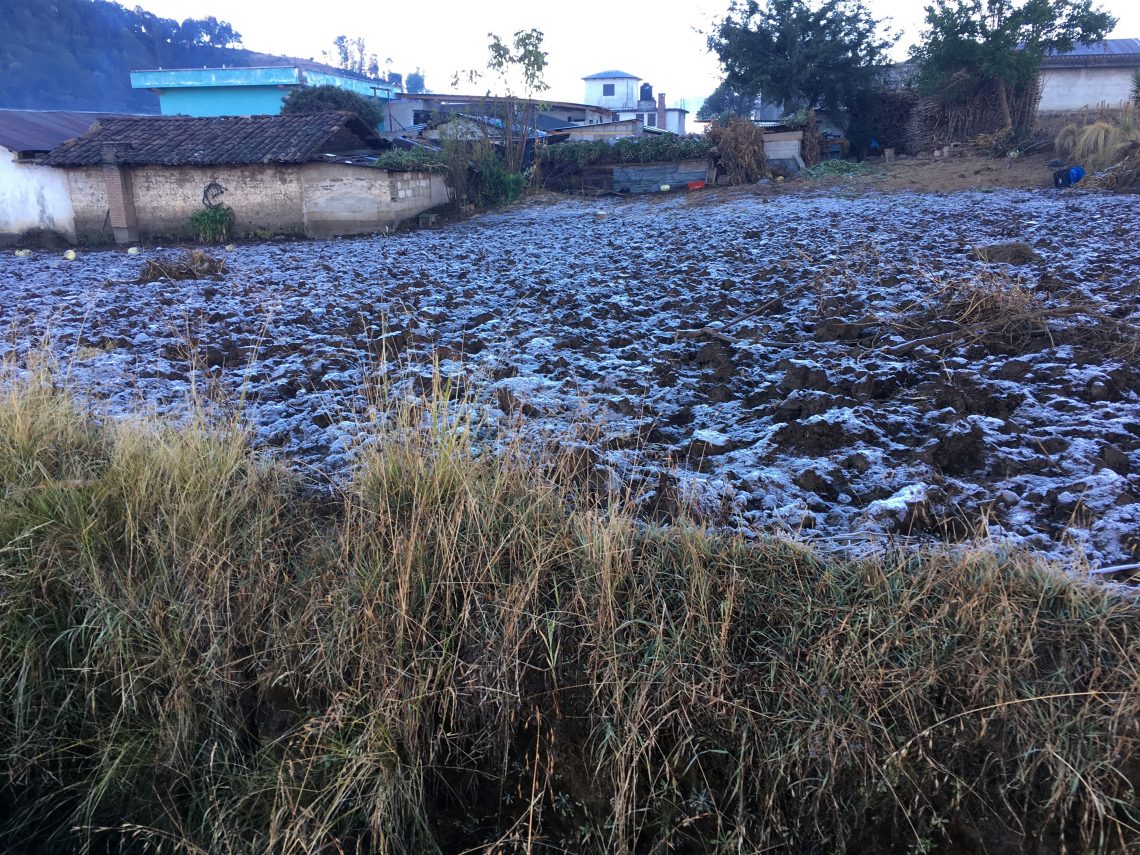 It is now winter in my town, or at least what passes for winter in the somewhat more equatorially located country of Guatemala. I’ve seen frost several mornings on the ground in my town, (something that didn’t happen during the summer months) and it is definitely preferable to take a shower in the afternoon, when the temperatures warm up considerably. 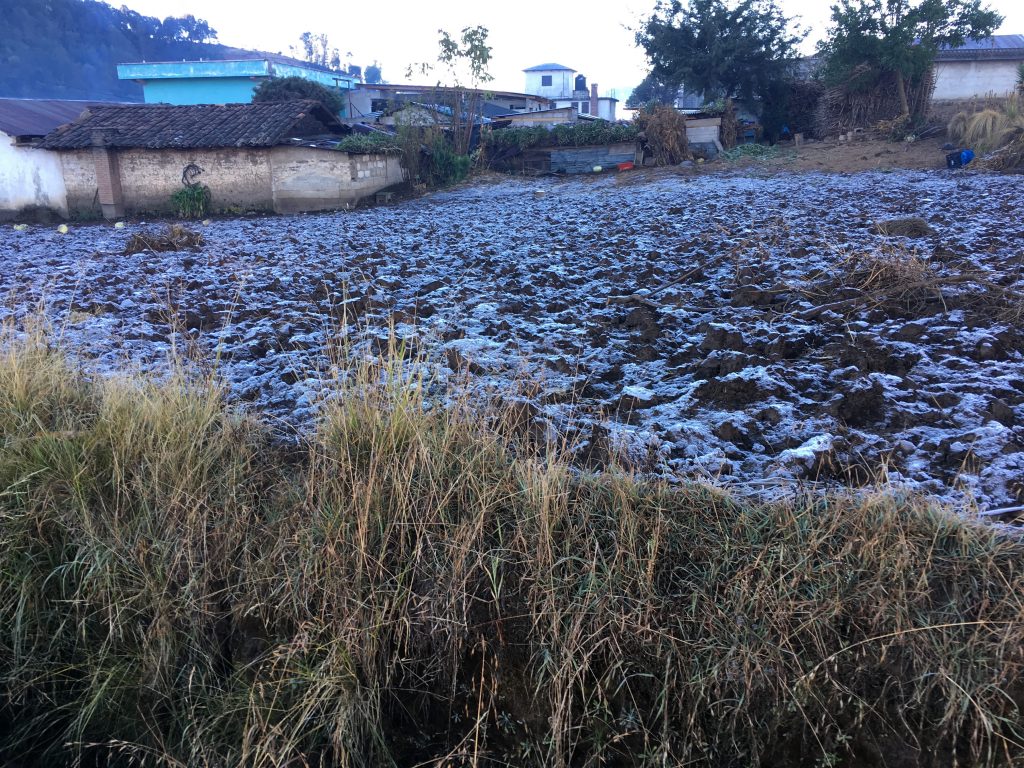 A cold snap has hit Guatemala the past couple of weeks, and sadly this resulted in the deaths of four hikers on the volcano Acatenango who died of hypothermia. People usually don’t equate hypothermia with a Central American country, and though small in size Guatemala has dozens of different micro-climates, one of them being the cooler western highlands where I live.

As I am writing this blog post, the temperature in my room is near 66 degrees, though in the wee hours of the morning it might fall to 53 degrees. I’ve discovered that there is a big qualitative difference between 53 degrees and 59 degrees in the morning, and when it is on the colder side my socios, or co-workers, will remark to me how cold it is! As I’ve got several layers on my bed, I don’t feel the cold at all at night, and if there’s a “heat wave” when the temperature hits the low 70’s inside, I might even have trouble falling asleep!

Before arriving in Guatemala, I generally thought that I’d be in a “warm” Peace Corps country, though when I returned home last August for a brief vacation, I bought a couple pair of thermal undergarments which have definitely improved my comfort in site by a modest amount, though I’ve gotten quite used to cold after living here for almost 14 months. I am constantly amazed by the women, (and even young girls) in my town who wear the traditional Mayan corte, or skirt, even when it is moderately cold outside.

Though I wouldn’t have chosen a “cold” Peace Corps country before coming to Guatemala, living in a moderately cold environment definitely has it pluses for volunteers as you can take advantage of the fact that every human body is a mini-furnace capable of heating itself to around 98.6 degrees, so I can adjust my comfort simply by adding and removing layers as I see fit.

At my health post, we celebrated the New Year by buying food together to cook on a grill outside. I’ve made salsa before, but I’ve never grilled the tomatoes before blending them! We also added the juice from a can of Jalapeños for flavor and it turned very well, so well that I will be replicating this sauce at some point in the future. 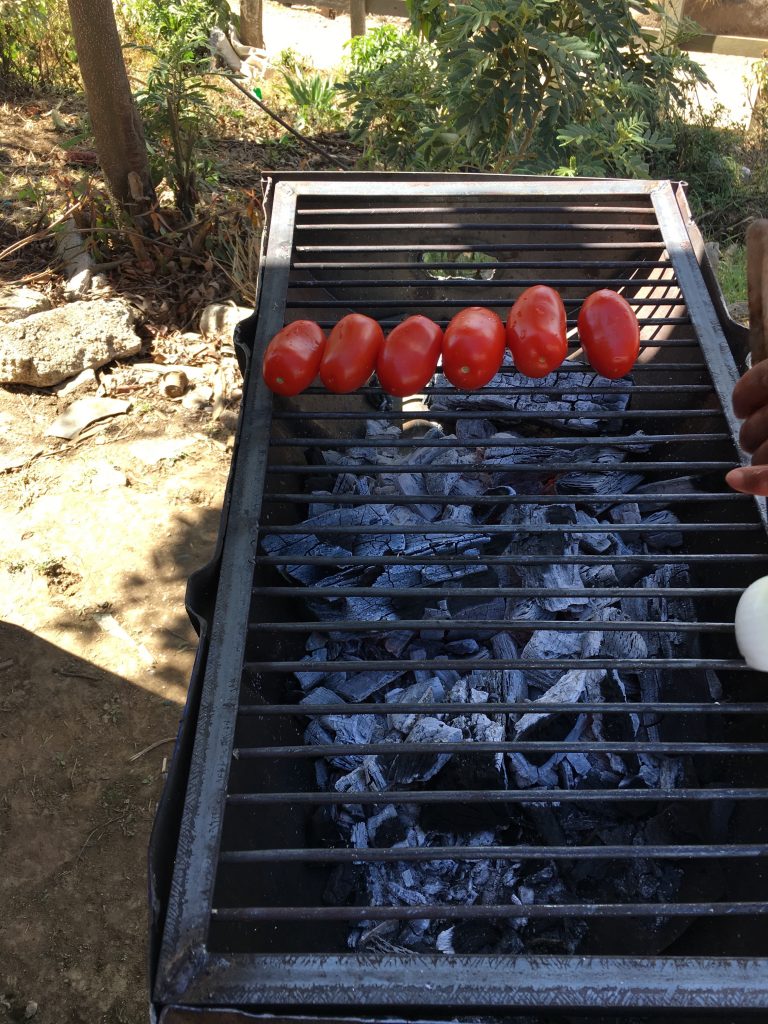 We mashed avocados to make a simple guacamole, grilled onions, and a flank steak that had been marinating, and then boiled potatoes followed by roasted them in tin-foil with added butter, as well as toasting corn tortillas on the grill and making lemonade. The whole meal tasted quite good, and it was special eating together with co-workers from this health post that I travel to frequently, and I learned a new way to make salsa! 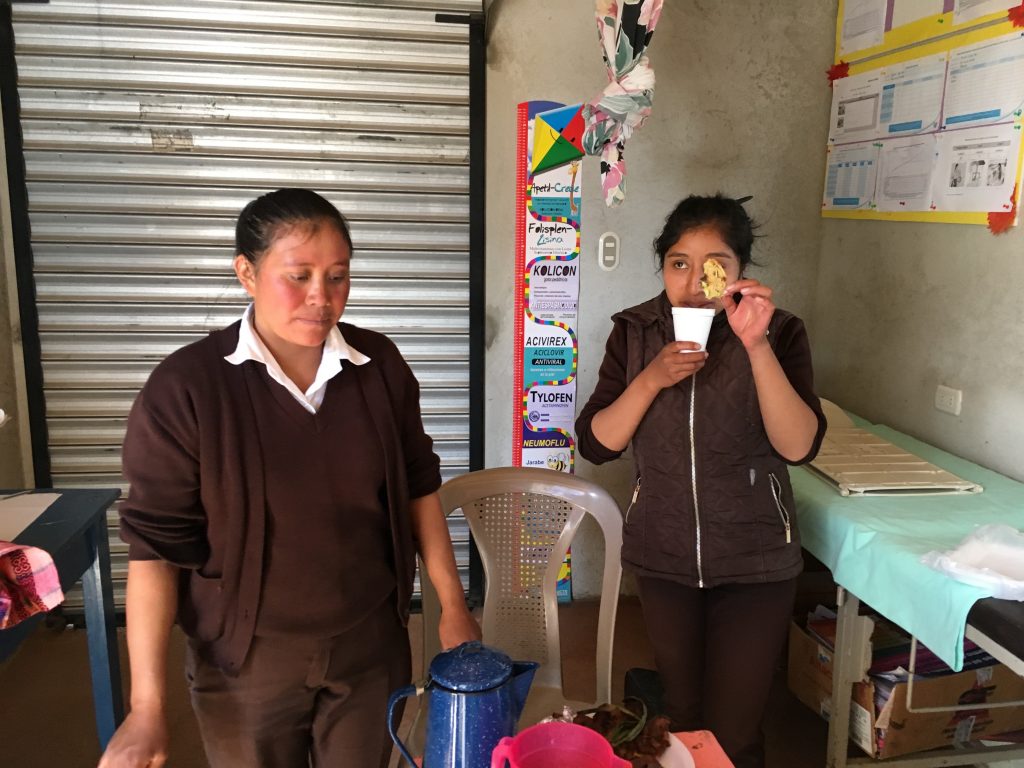 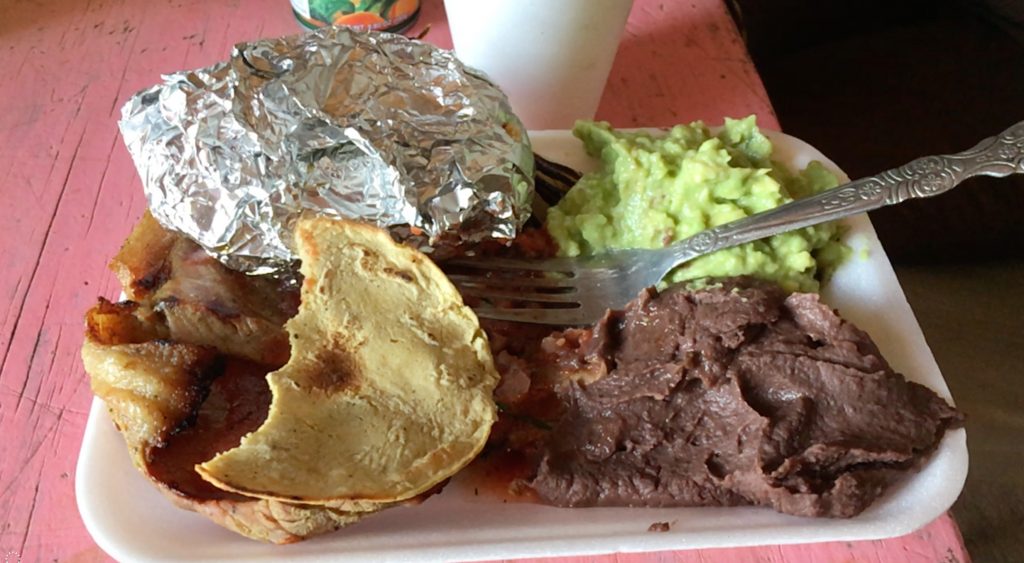 The dried-out corn stalks are being harvested from the milpas (corn fields), and I’ve seen them being fed to the cows, and today I learned people here will burn them in their planchas (stoves) for heat. 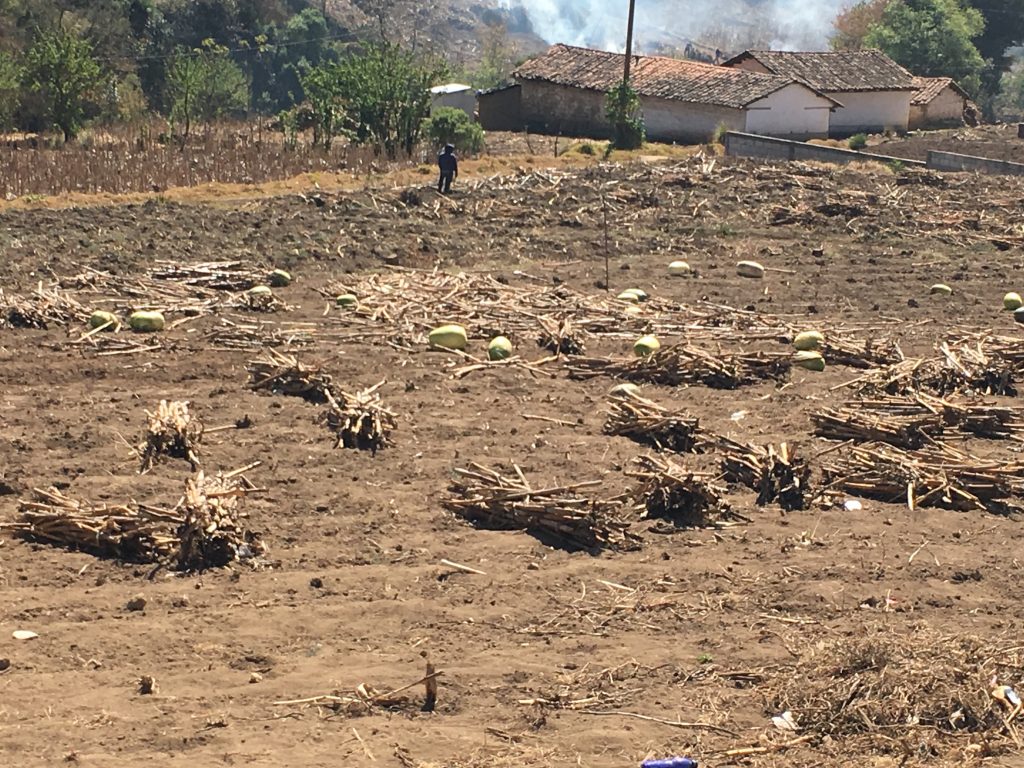 Last winter, after having arrived in my town fresh off the tuna boat, the barren corn fields and dusty roads felt like the surface of an alien planet. Where had all the green gone? I waited patiently (and sometimes not so patiently) for the corn stalks to grow again, to cover the sides of the mountain once again in vibrant green. I wanted to stare at corn fields and pretend, if just for a couple minutes, that I’m somewhere in Iowa. 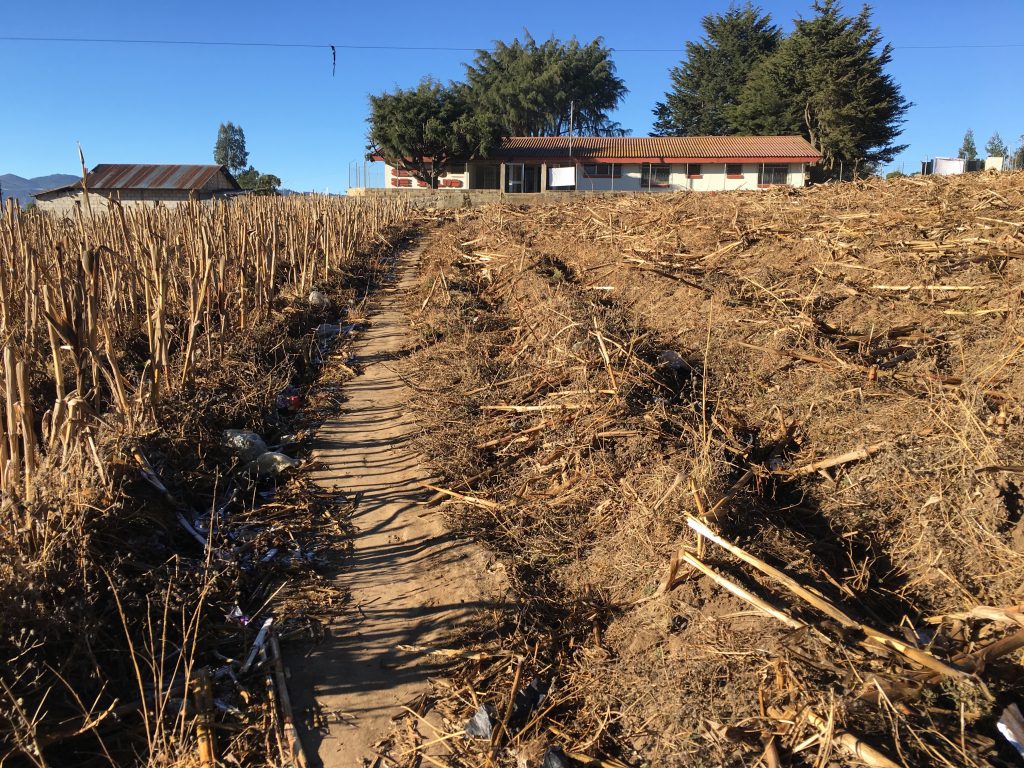 Now I barely notice, and I don’t mind all the polvo (dust) and mounds of dirt in the corn fields as I’m much busier and much more comfortable living here. The landscape has now become just that, mere background music that exists only when I force myself to notice, of secondary importance to the main actors in the play of my daily existence here, co-workers, friends and community members as I’m focused, and excited really, about current and future projects.

Winter is coming, but I don’t seem to mind.