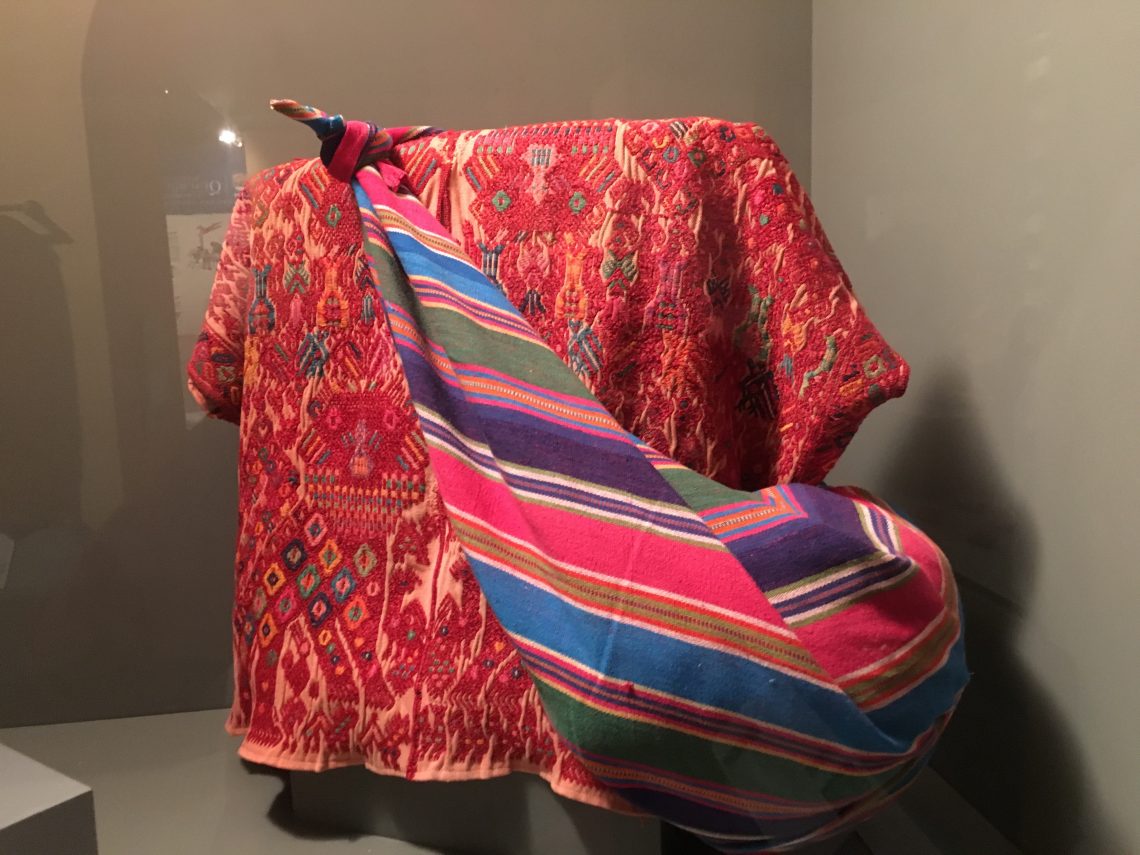 Last week I was fortunate to be able to go on a VAC (Volunteer Advisory Council) sponsored trip to Guatemala City, which included visiting the Museo Ixchel del Traje Indigena (Ixchel Museum of Traditional Mayan Dress) and the Popol Vuh Museo (a museum featuring pottery and stone carvings among other things) in addition to the Palacio Nacional de la Cultura (National Palace of Culture). We boarded one our trusty Peace Corps vans early in the morning and later stopped to eat breakfast in Guatemala City as we got there before the museums we planned to visit opened. 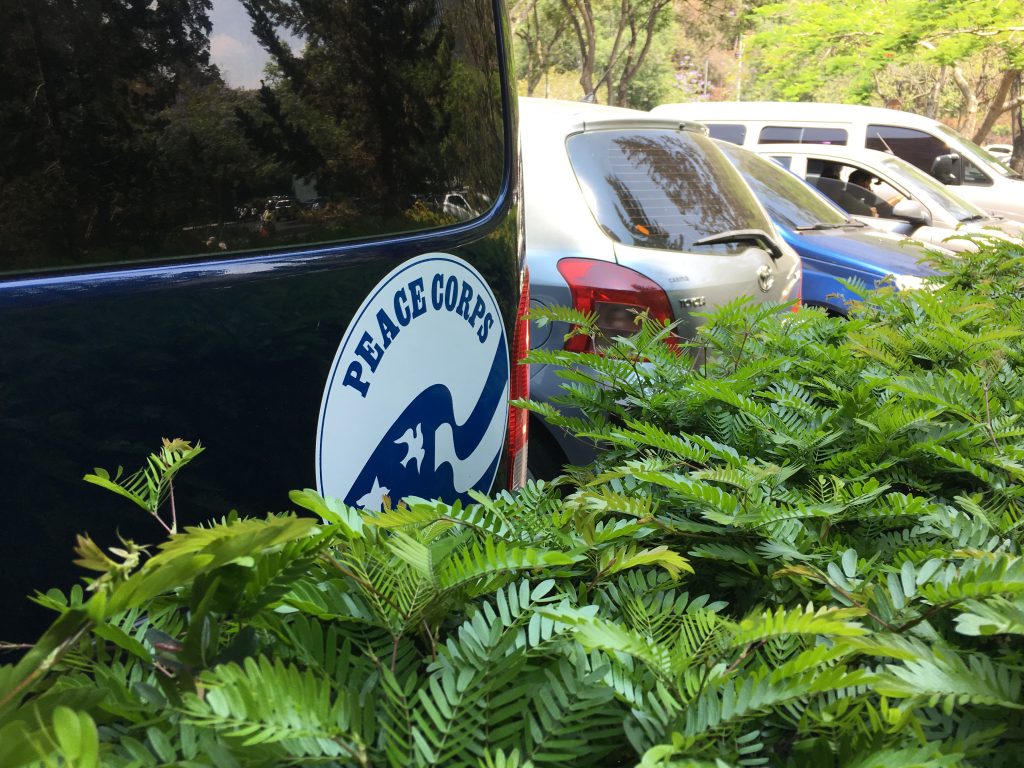 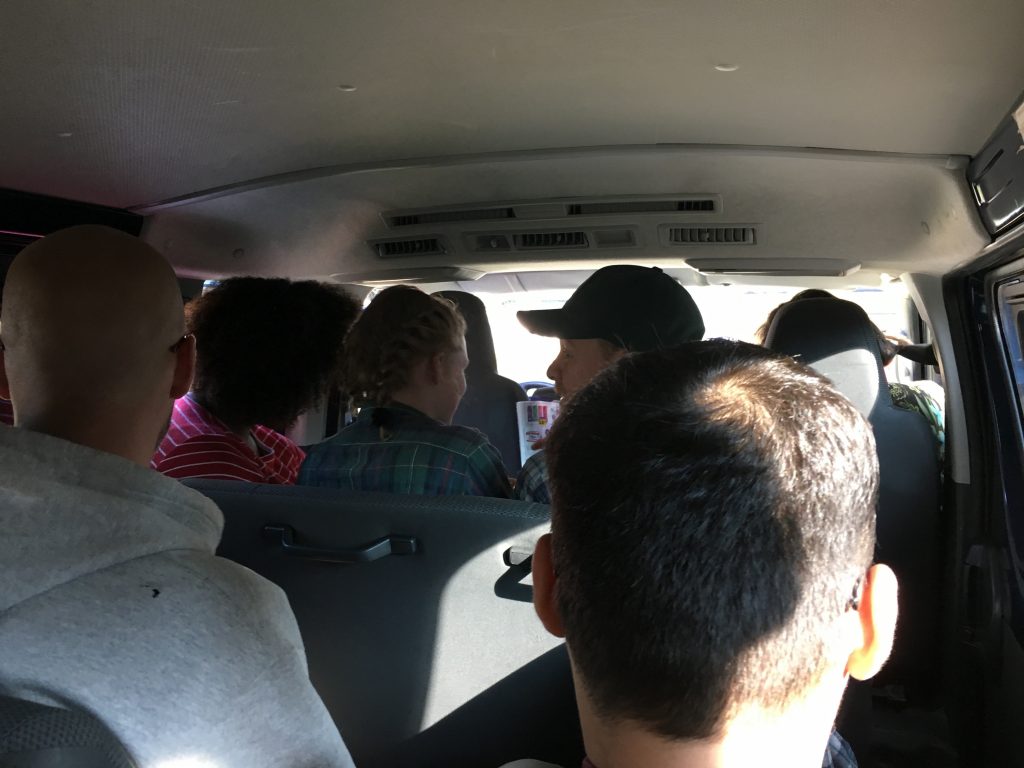 I was taken with an especially colorful Minnie Mouse style cake in the window of the bakery, a far fancier confection than I’m used to seeing in the simple bakeries (or panaderías) in my town. 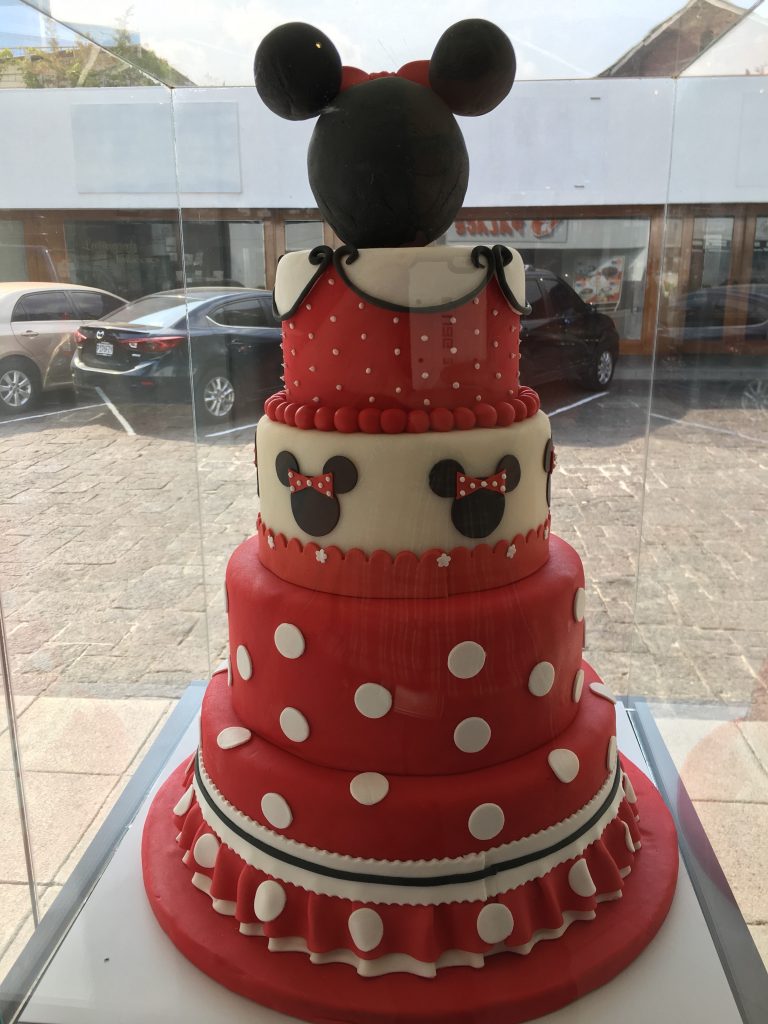 Many of us ordered coffee as it was kind of early in the morning. 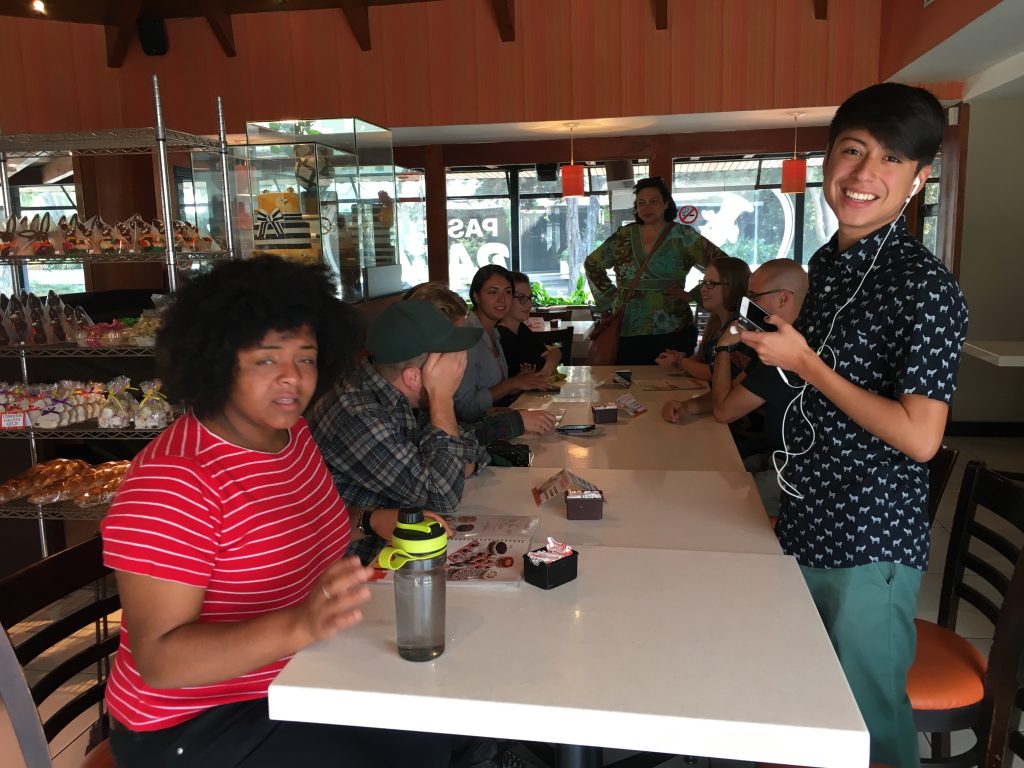 The entrance to the museum was quite beautiful. 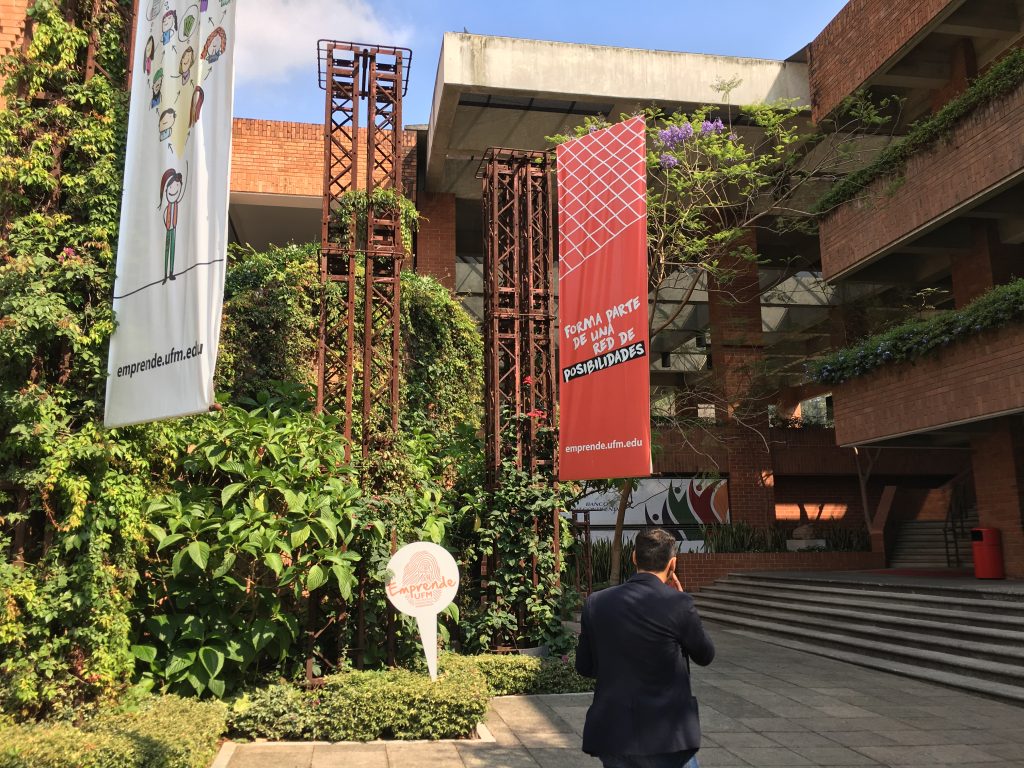 I paid a nominal fees for the privilege of taking pictures in both museums, a benefit which surprisingly didn’t carry over to the large gift shop! 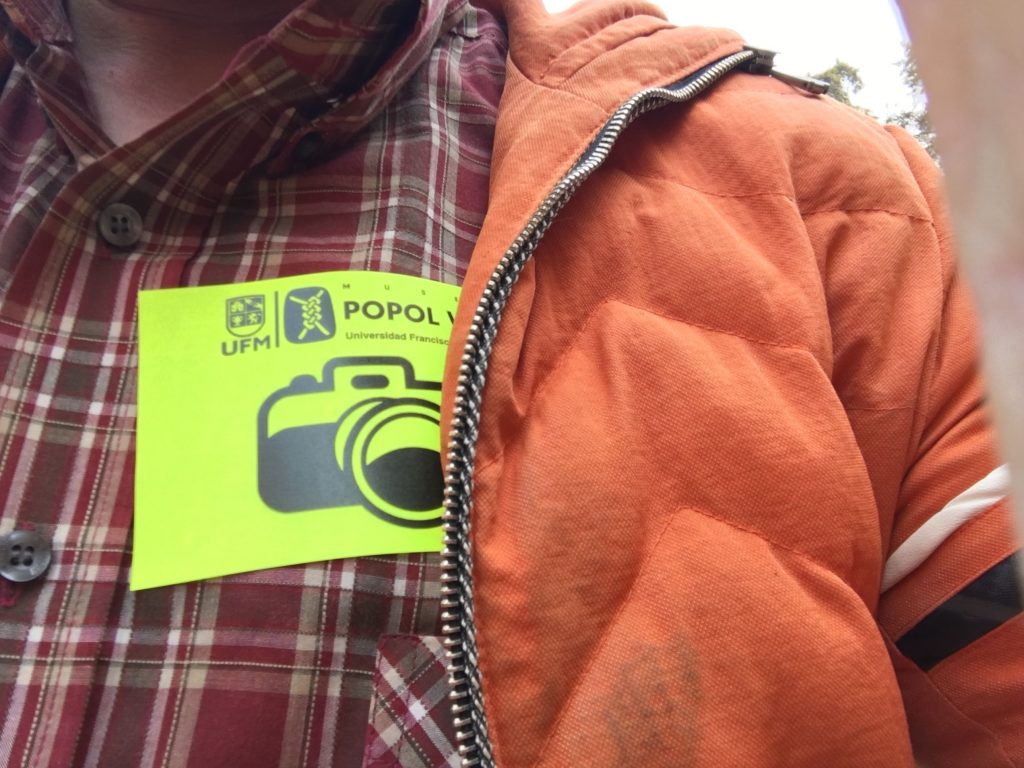 First we visited the Museo Ixchel del Traje Indigena was especially interesting as Guatemala is famous for the colorful traditional fabrics which are worn by most women in my site, are sold in many towns and which astounded the Spanish conquistadors when they first arrived in the region. 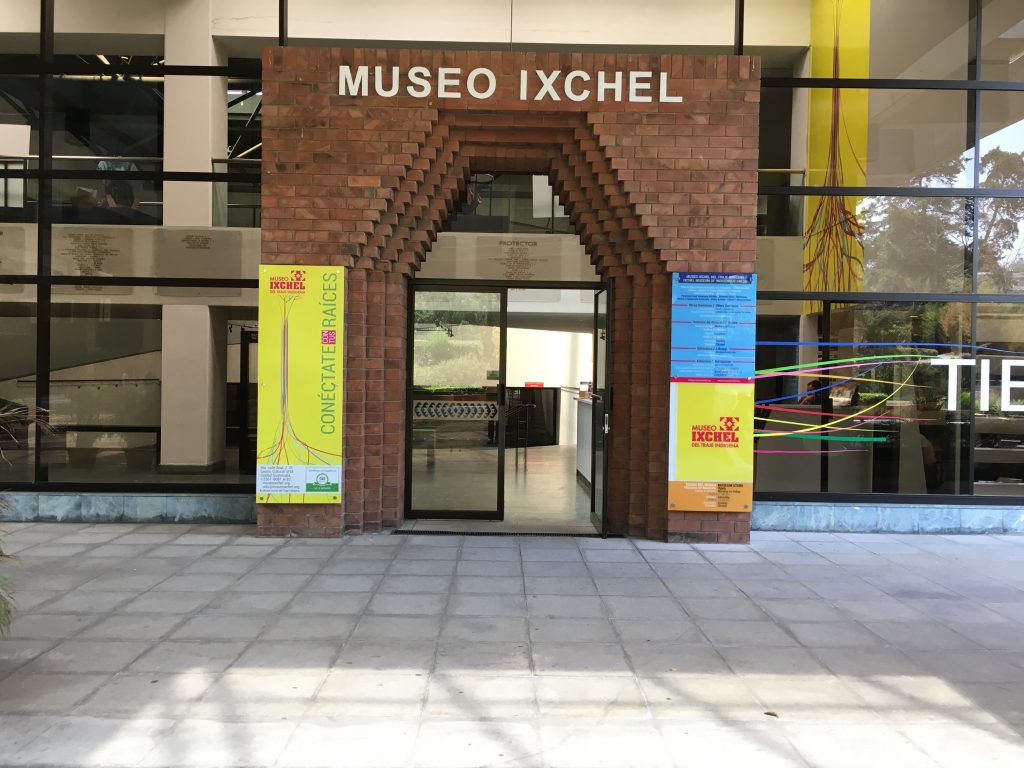 The traditional shirt for a woman is called a “huipile”, sort-of pronounced like “we peal”, and some of the female volunteers have amassed a small collection of this colorful but lightweight garment. The museum showcased several examples of huipiles from different regions of the country and pictures of women engaged in embroidering. 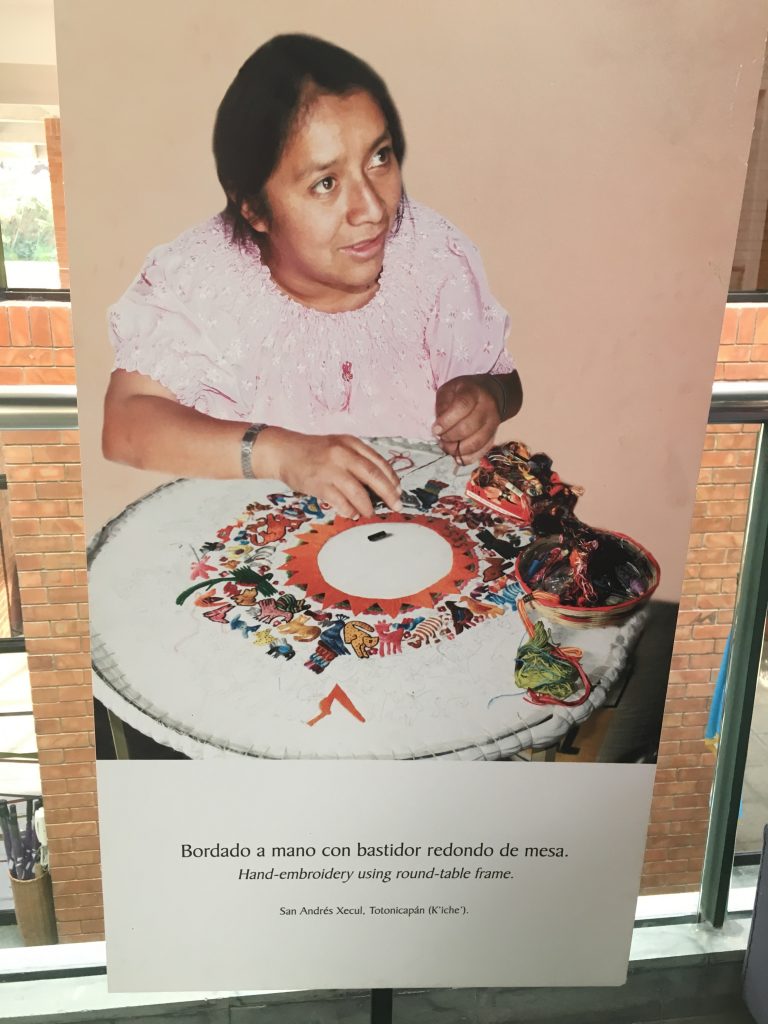 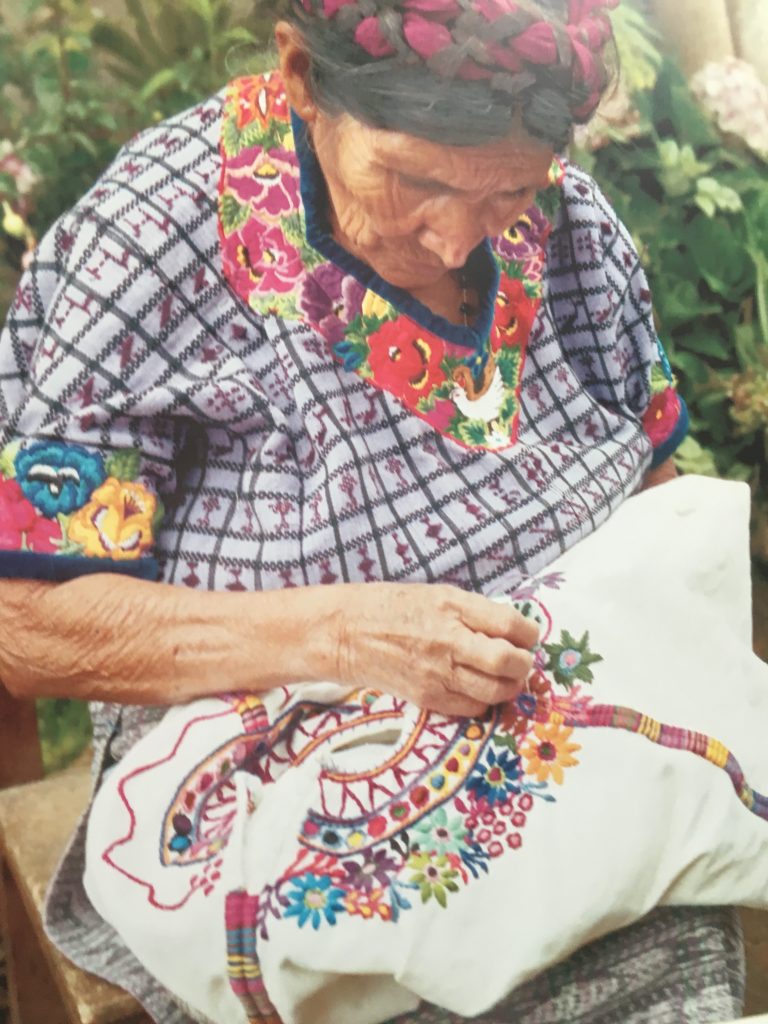 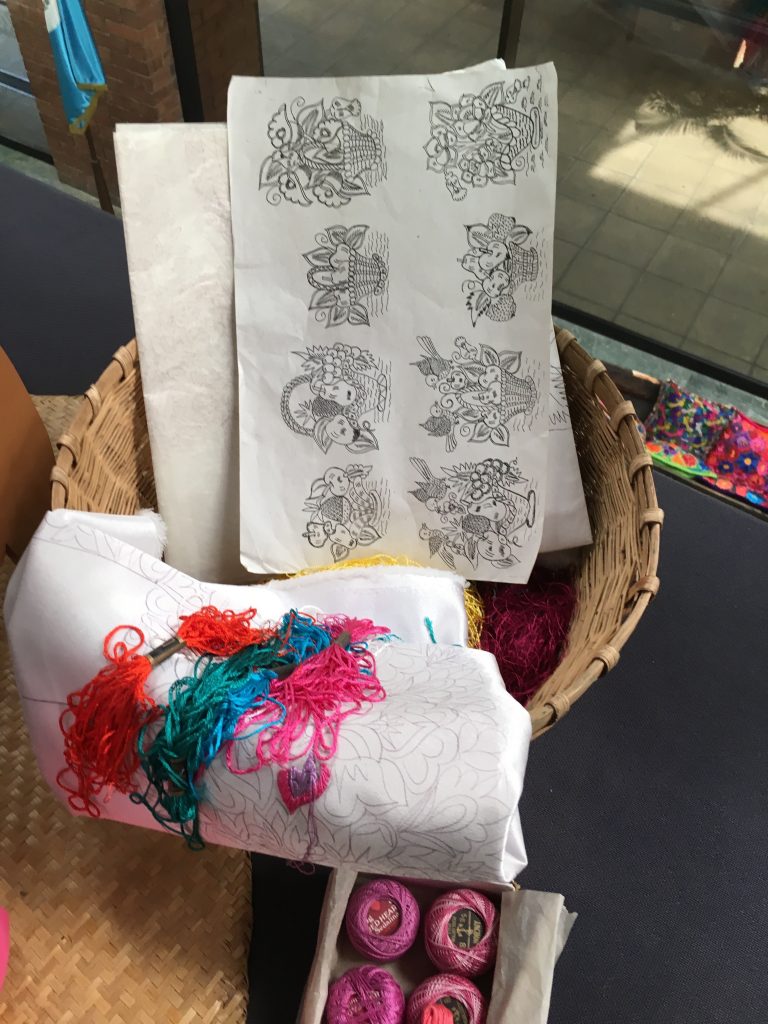 There were also examples of the loom used to weave fabric, most of which is made from cotton. Mayans first started making textiles around 5,000 to 2,500 B.C.E., and once the loom was invented, they were able to make large amounts of fabric for clothing. However, making the traditional “traje”, or skirt, for a Guatemala woman is very time intensive tasks that takes months of work if done by hand. Most traje is probably made by machine these days, and includes the use of modern brightly colored acrylic yarn. 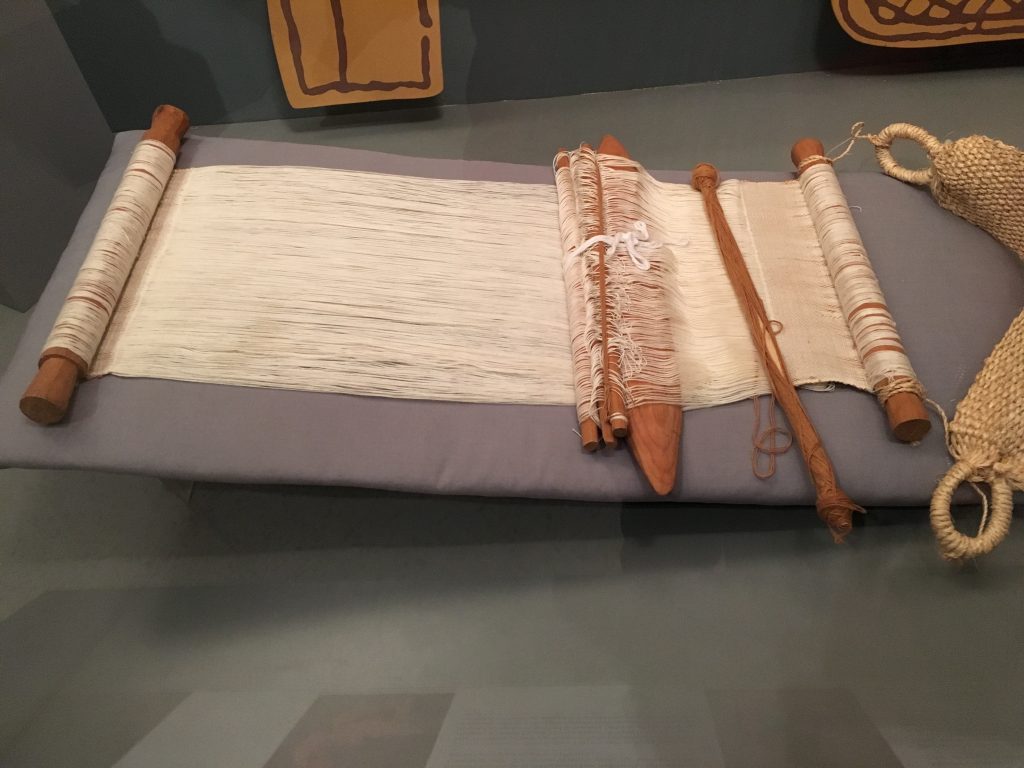 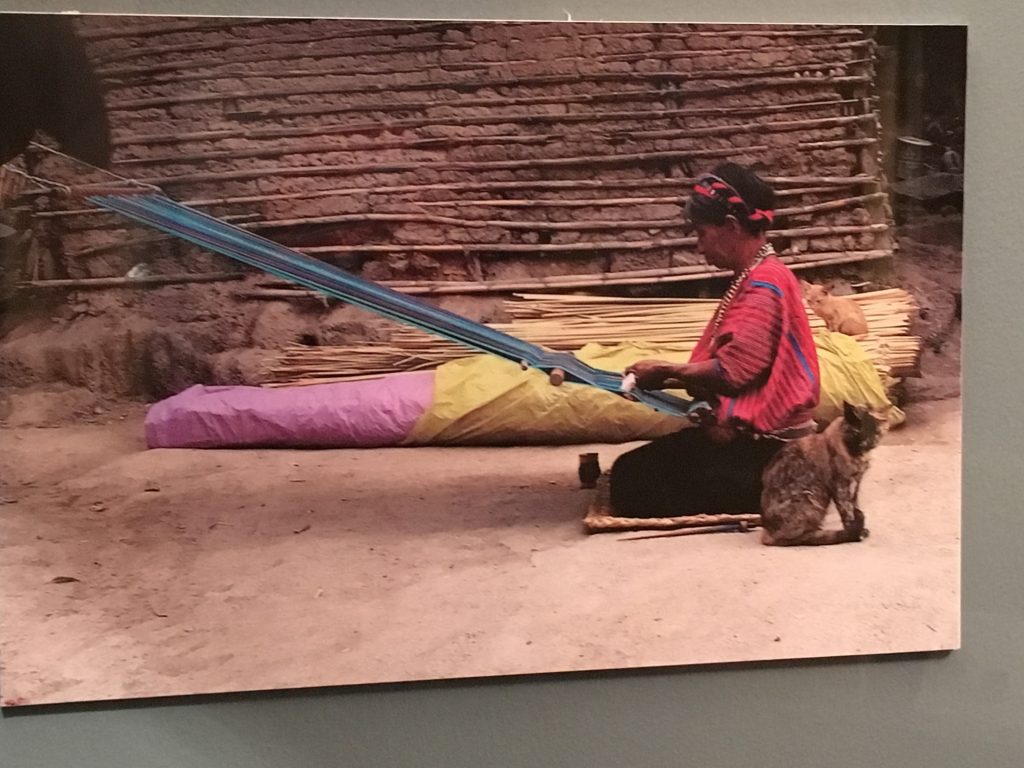 Interestingly, different areas of Guatemala are known for a specific style of traje. Each of volunteers us looked for our region of Guatemala, and judged if the traje on display was actually indicative of the people from our towns by looking at the color choices and patterns. It was a semi-surreal experience for me, enjoying a western-style museum on the topic of Mayan dress that would be esoteric, even unapproachable for Americans who have never visited Guatemala, yet at once it was also intimately close to us volunteers in relevance and immediately recognizable. 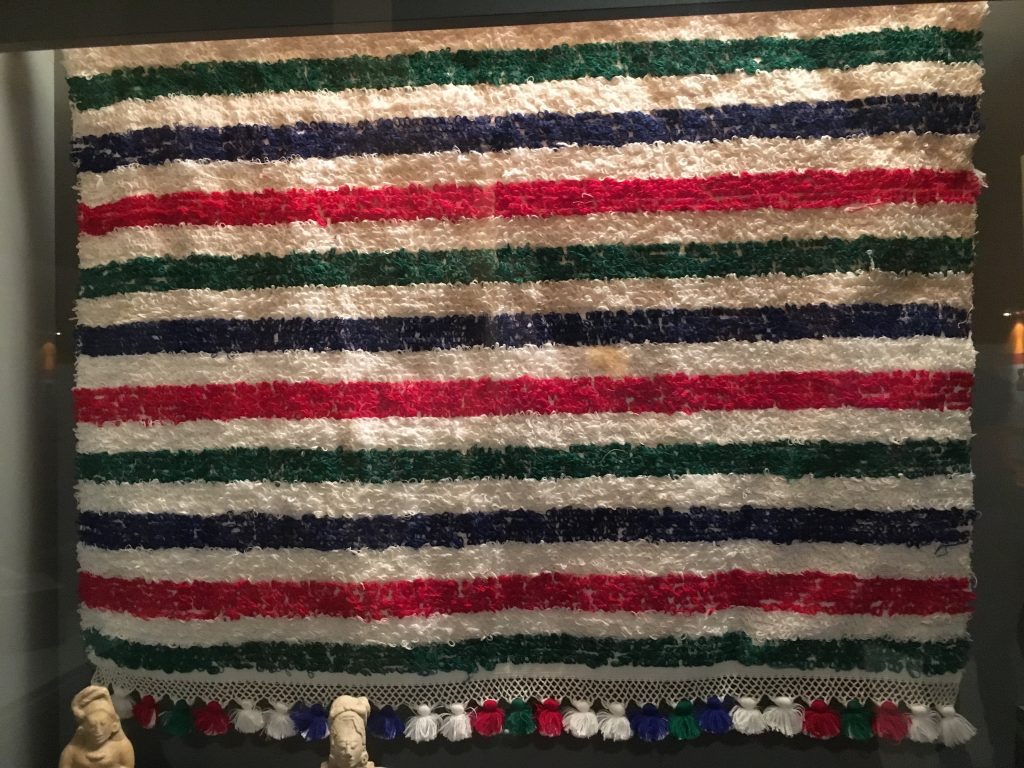 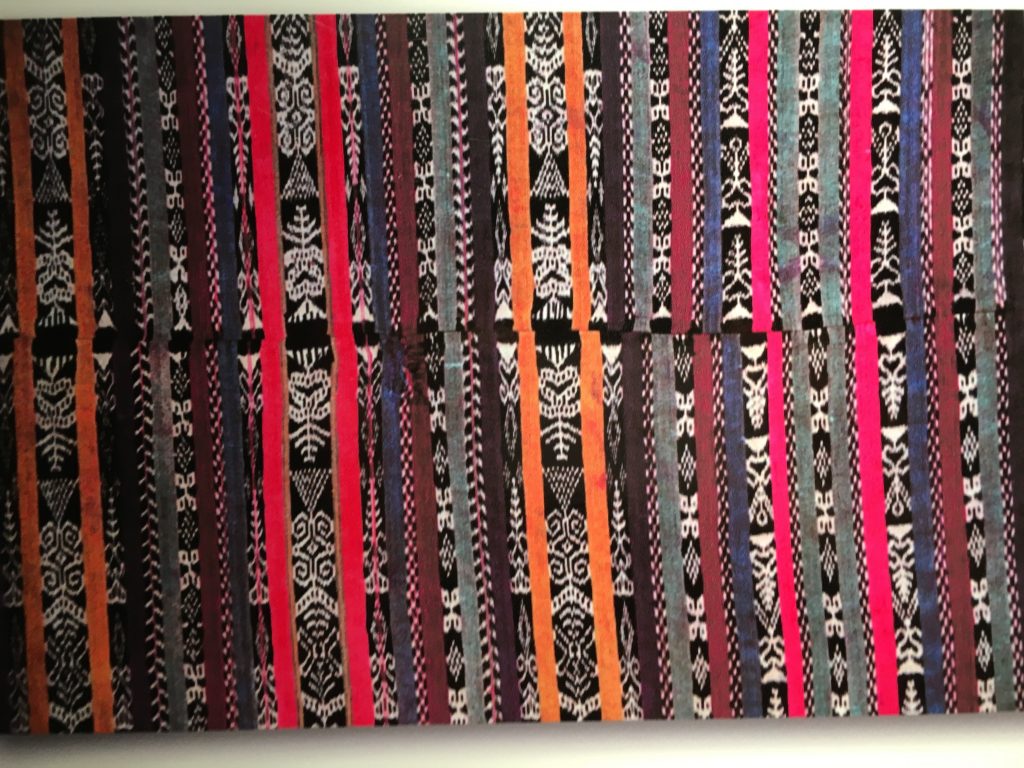 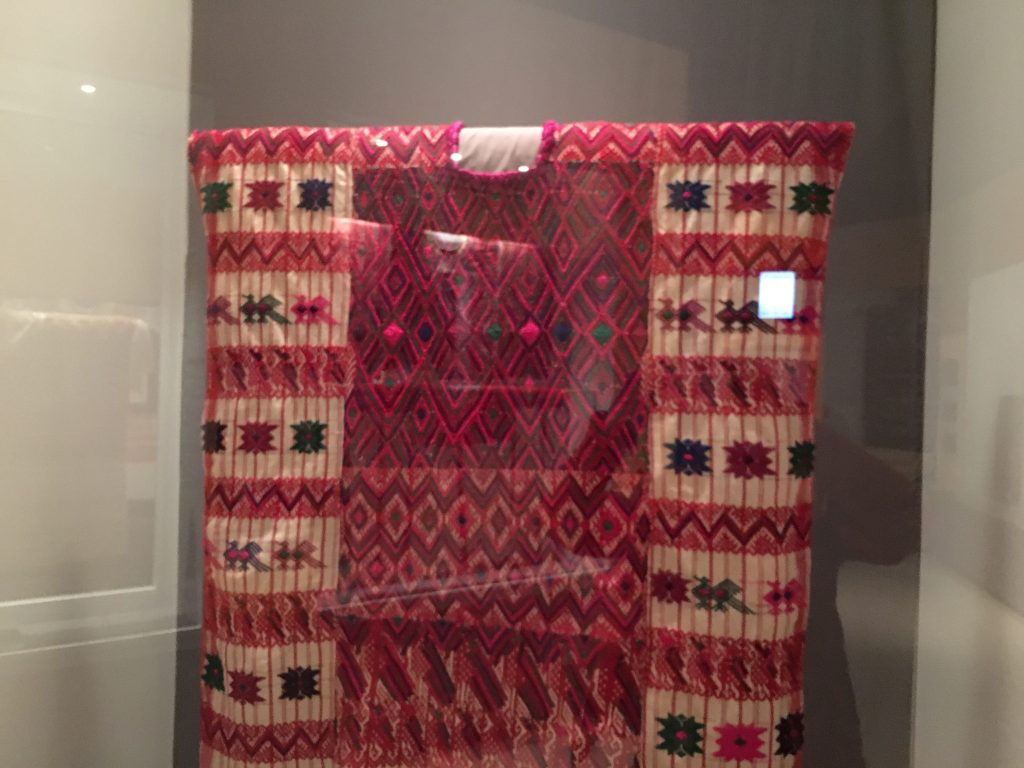 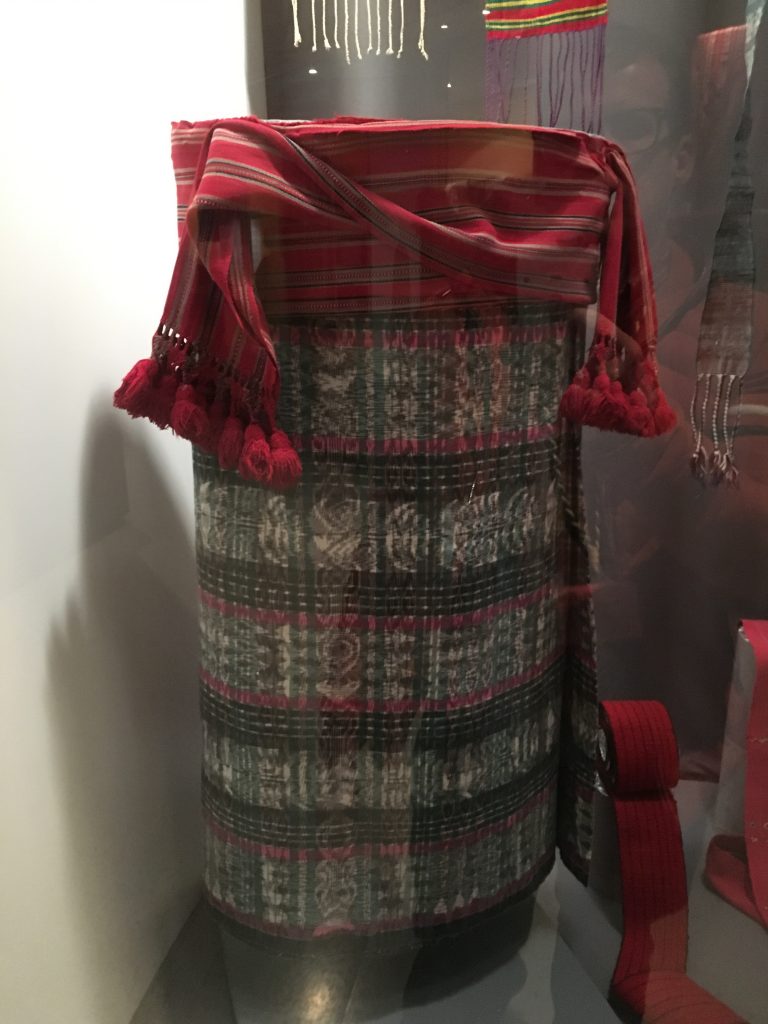 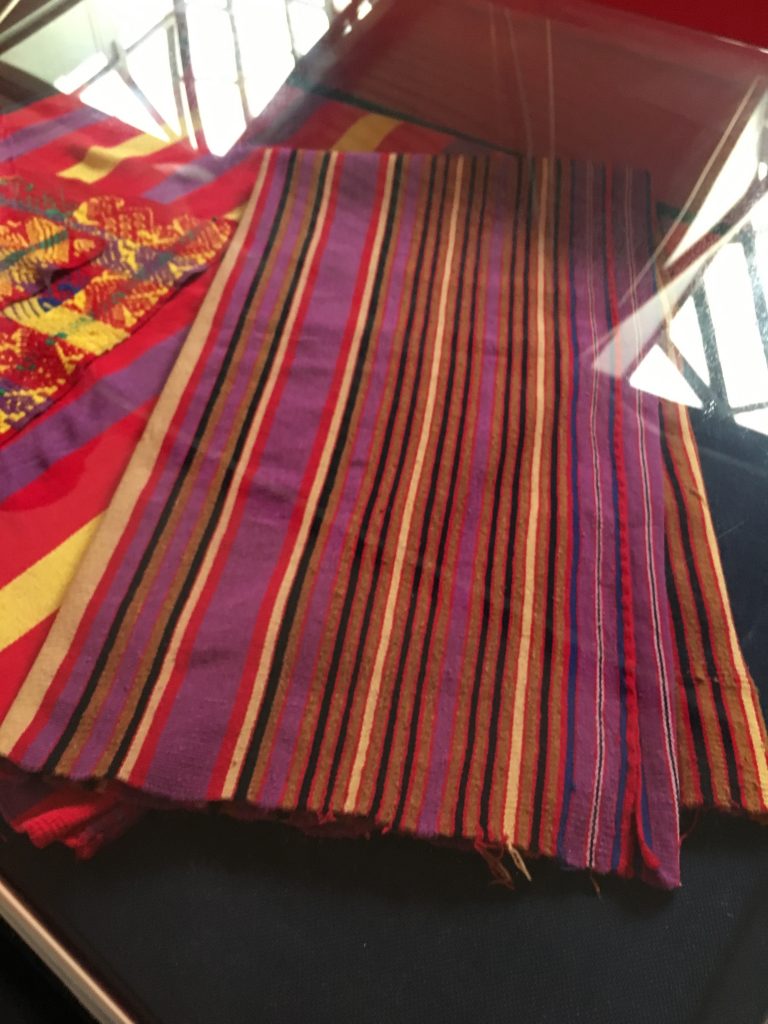 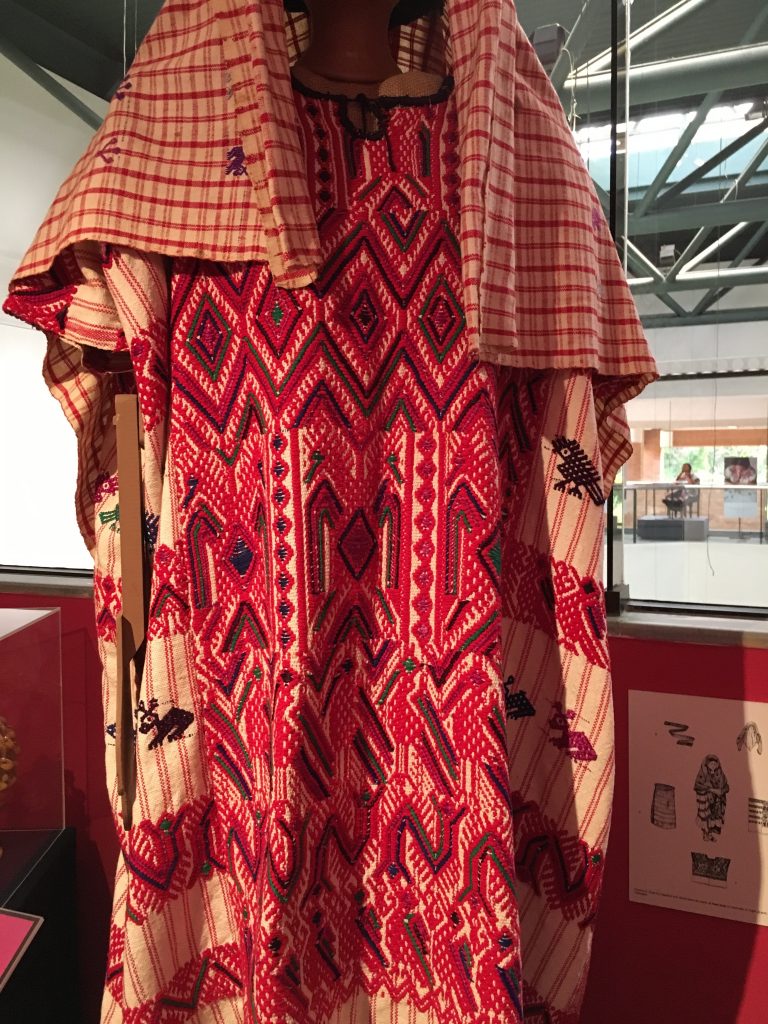 Present on the walls of the museum was both a geographic map depicting the regional presence of different types of dress, in addition to a map showing the usage of the 21 Mayan languages currently spoken in Guatemala. Noting the similarity between the two, I couldn’t help but conclude that culture really does follow language! Here is a map showing distribution of Mayan languages in Guatemala: 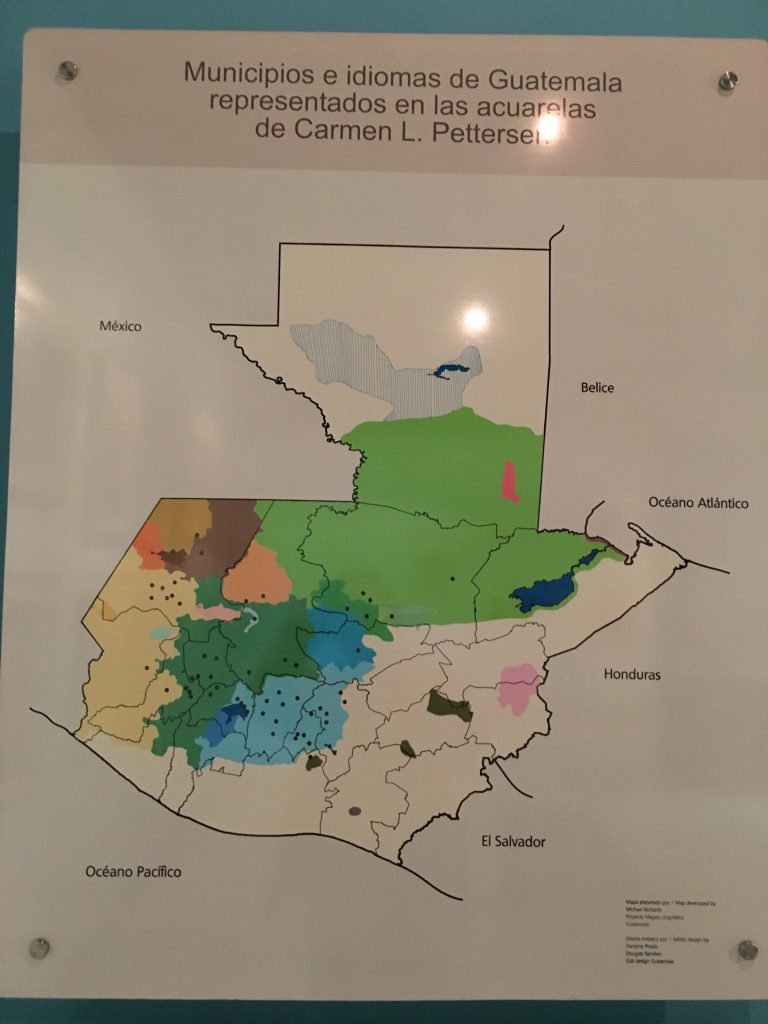 And one showing the geographic distribution of different types of huipiles or shirts: 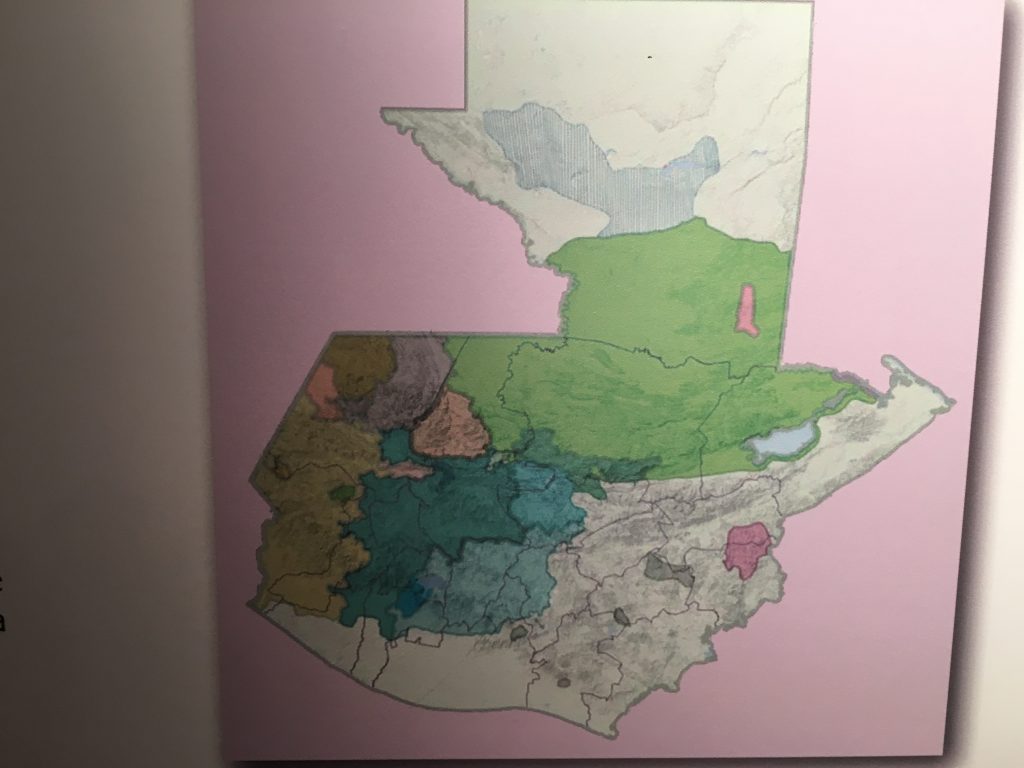 I also learned that cotton can be selected for it’s natural color, and that there are colors of white and brown color which hold their color over time. 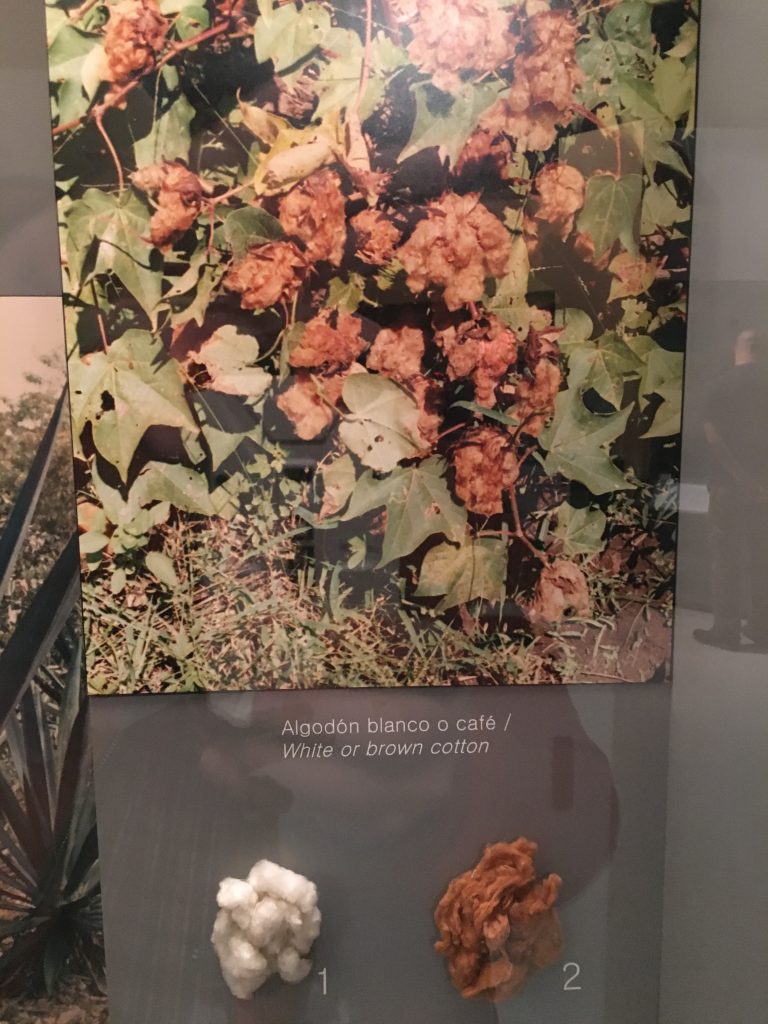 I also discovered that you can get a blue dye, indigo, from a plant called “Indigofera” which grows naturally in many countries. Here is a picture of that plant below, and some yarn that has been dyed blue with indigo dye made from said plant. 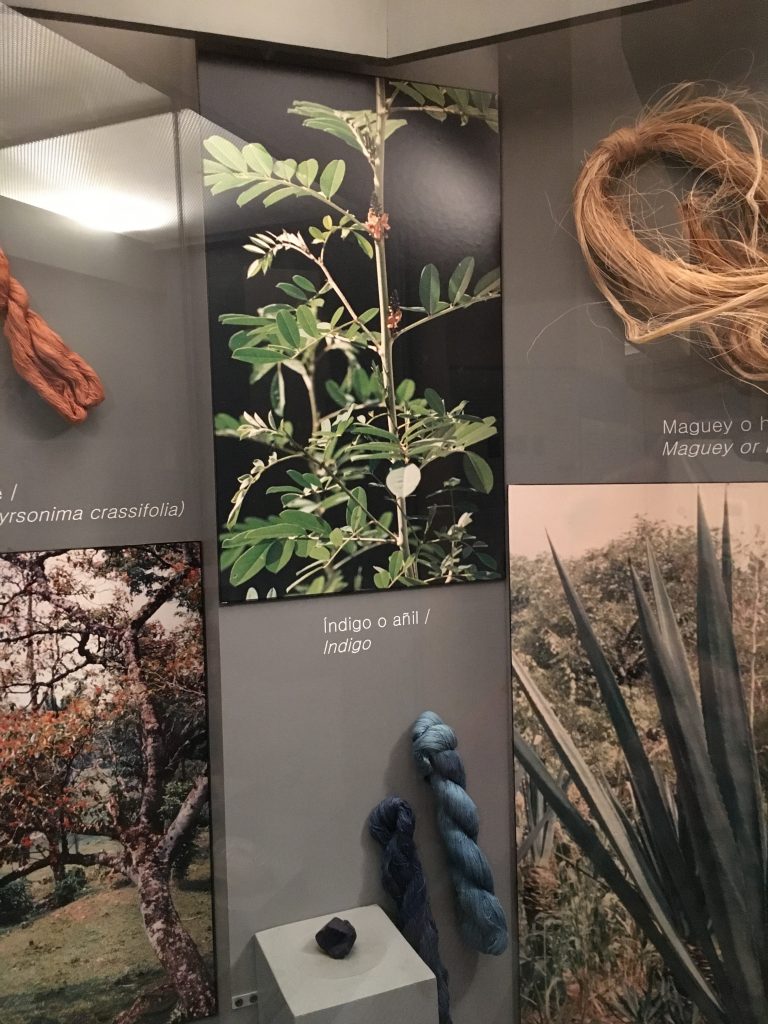 Besides being used for a skirt, fabric can also be used for head-ware and for slings for carrying babies on the backs of women. 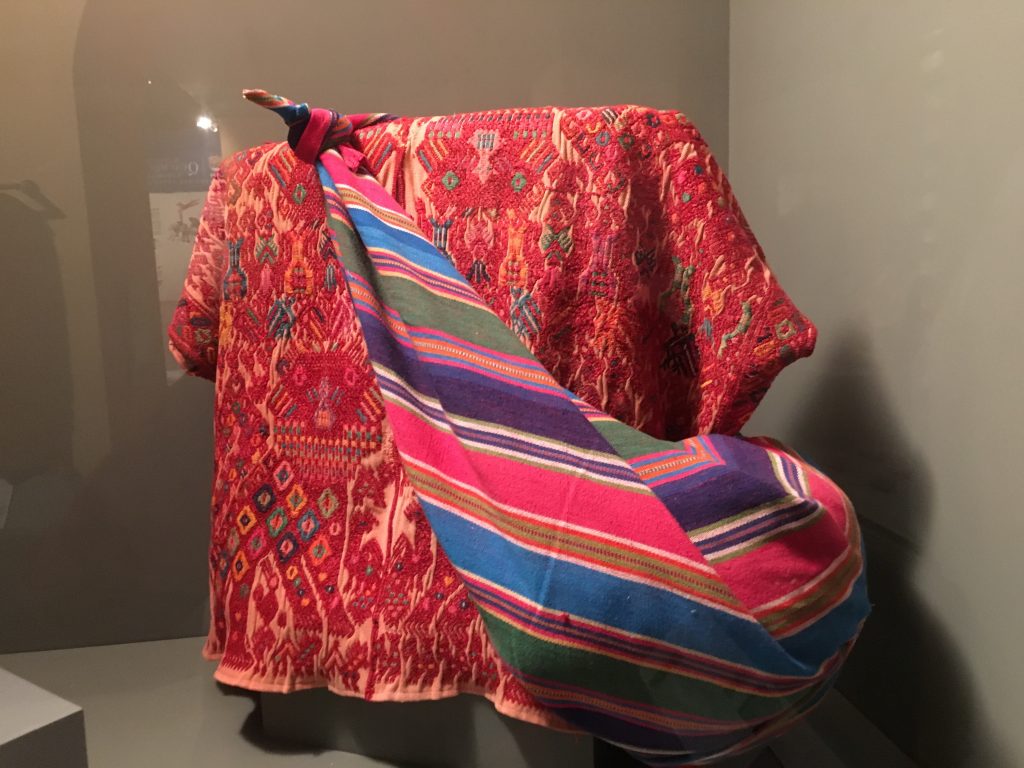 There was also a photo of a Guatemalan woman in the traditional traje in the market, and one of a woman using the modern baby back carrier. 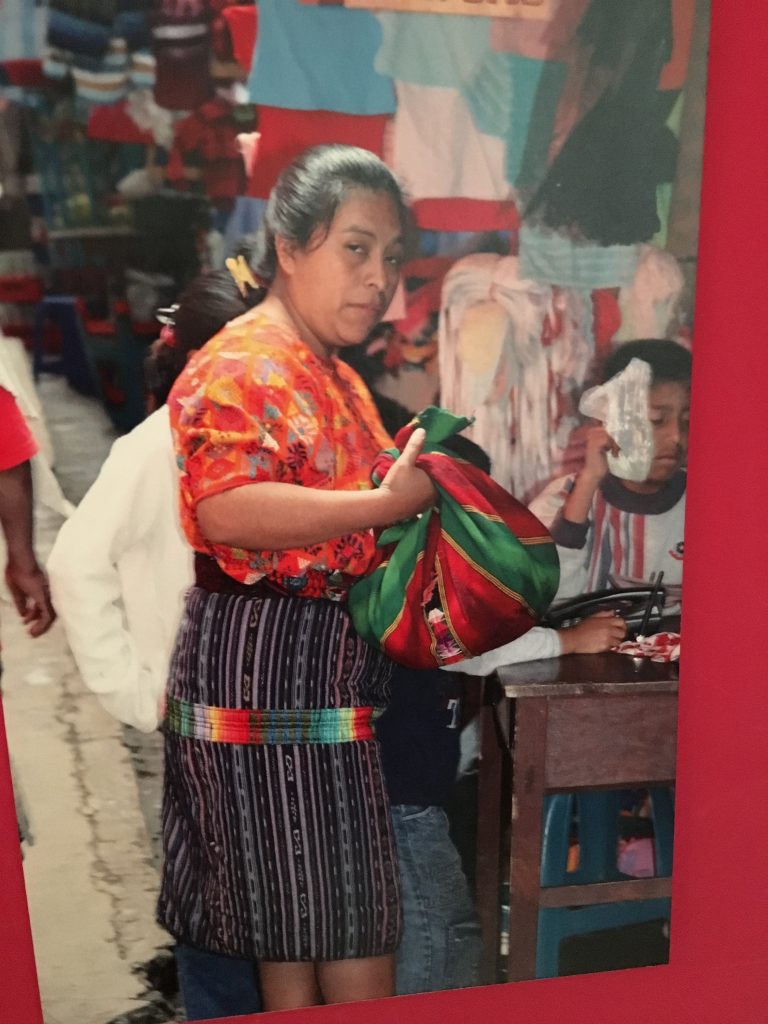 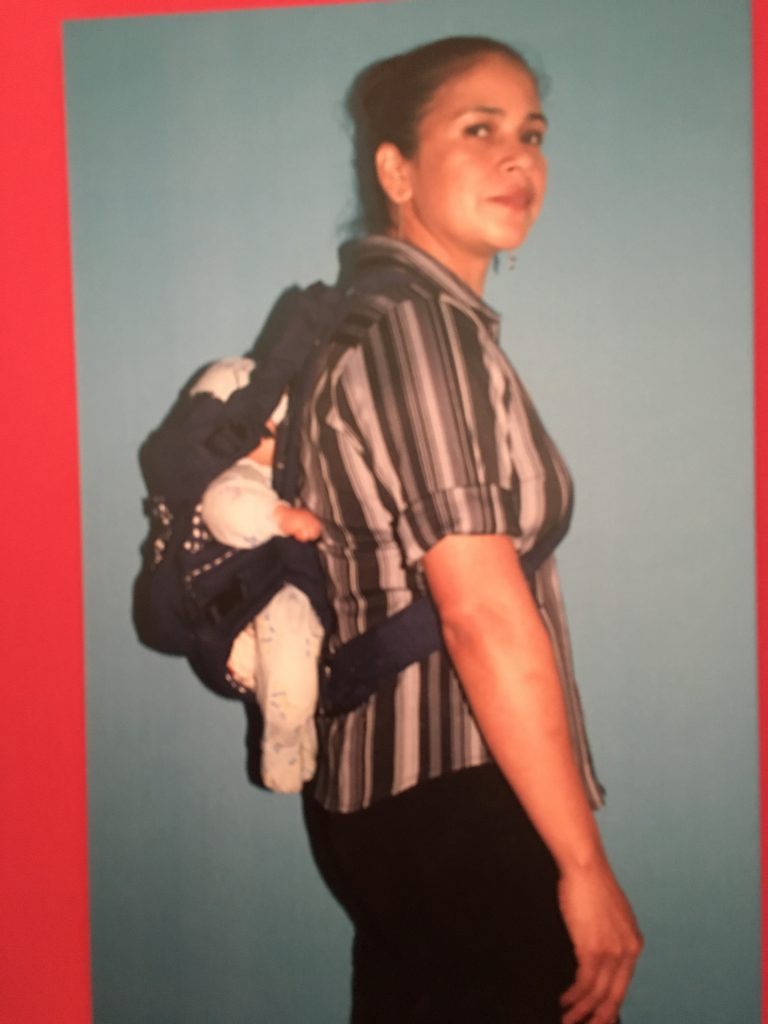 In my town women often wear the traditional traje, though they might also decide to wear western style clothes during part of the week. Here is a video from market day in my town, you can see a couple women carrying babies on their backs and dressed in the traditional traje skirt, but opting for a western-style sweater or jacket for the top. Western style clothing, with many of the same brands as in the U.S., can be easily found in stores called “pacas”.

There were also examples of the traditional Mayan dress for men which isn’t nearly as popular as the traditional traje for women, though I have occasionally seen men wearring similar clothing outside of my town. 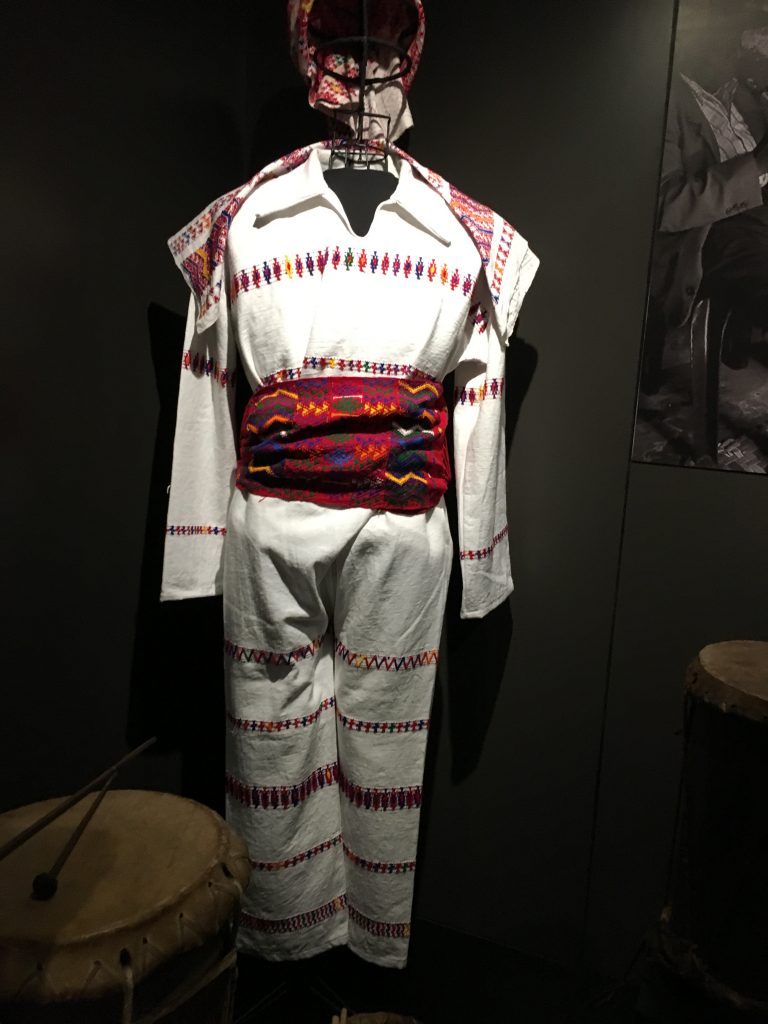 All in all, this was a very thought provoking excursion, and I’m glad I learned more about the colorful Guatemalan fabrics that I see everyday in my site!

Nonetheless, seeing clothing somewhat similar to that worn by women in my everyday environ of a small Guatemalan town plastered up in displays as lifeless as taxidermy and bookishly characterized gave the whole experience a sterile feel. As a volunteer in a relatively isolated area of Guatemala I’m used to thinking that most of the world continues throughout their day with little thought in the world about my rural village, and then seeing that same region of Guatemala put under the academic microscope in an, admittedly world-class, museum in Guatemala’s eponymous capital city, made me feel exposed somehow though also proud to see Guatemalan culture presented to those unfamiliar with this aspect of it.

Coming up in a future blog post, the Popol Vuh museum, the National Palace of Culture and how we spent the rest of the action packed day! 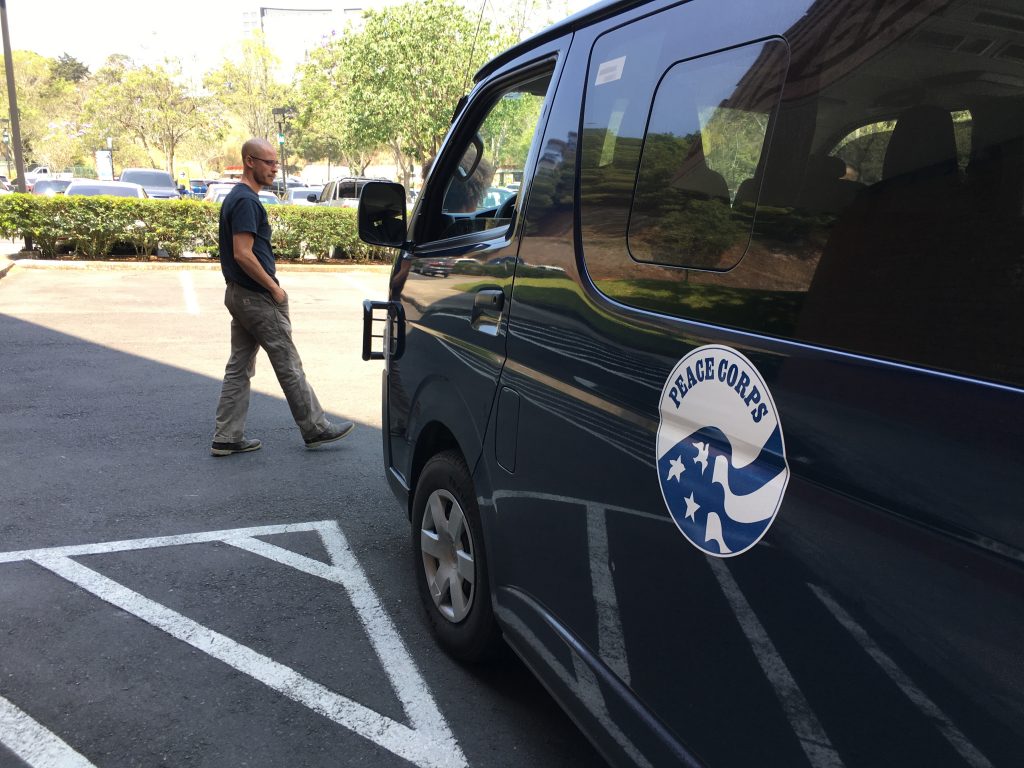 Field Based Training and Pan Mojado!